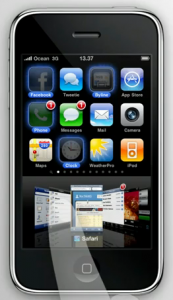 A few weeks back, we shared a video by Swedish Design agency Ocean Observations which demonstrated a rather clever (but arguably useless) concept: Exposé for the iPhone homescreen.

We shared that video on a whim, and the resulting conversation and comments were outstanding. As a result, the same design firm has since churned out two more iPhone-related concept videos: Coverflow Multitasking, and Dashboard Widgets. Just like the last time, we’re left wondering: would you use these?

Multitasking on the iPhone; it’s unlikely to happen on the current hardware due to battery limitations, but that hasn’t stopped the users from clamoring on about it every chance they get. Ocean Observation’s solution is very webOS-meets-Coverflow. You swipe back and forth between apps to switch between them, and then “throw” them out of the line to close them. I’m not sure if they’re implying that this Coverflow drawer should be visible at all times on the homescreen, or if it’s a slideout drawer – but if it’s the latter, I think I’m in love. Sure, it’s a bit unoriginal when you’ve got webOS’ Cards system in mind, but what is Cards except for a fancy version of ALT-TAB?

The newest video of the bunch, just released about an hour ago. It’s an almost direct rip of the Dashboard system in OS X, all the way down to the edit button used to bring in/dispose of widgets. The most original part of this video is the concept of a three-finger pinch gesture which, too my knowledge, hasn’t been used anywhere. Alas, I’d imagine it would cause system conflicts – once you introduce system-wide gestures, you have to deal with false positives firing off the dashboard when you’re just trying to zoom into a map.

Still, I’d welcome a constant widget layer with open arms, especially if big-boy multitasking never becomes a reality. Give widgets a limited API – just enough for pulling down certain data (weather, server status, stocks) from the web every 10-15 minutes, keeping track of lists, and other basic functionality that won’t destroy battery life, and you’ve just made a whole lot of people happy. Plus, you could easily sell single purpose widgets for 25 cents a pop.