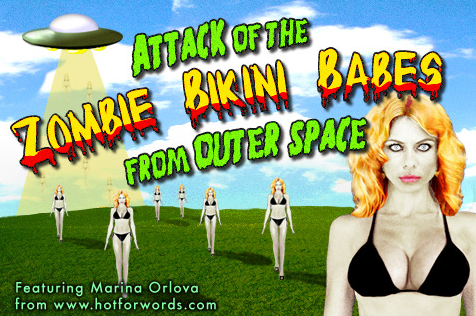 Pretend, for a moment, that you’re one of the creative minds at Smule; you and your team have had a series of back-to-back successes, and your audience has come to expect a certain things of you. They expect the utmost highest design quality, for it to be music-related, and — perhaps worst of all — some level of maturity. When expectations are high and narrow in focus, how are you supposed to unleash your creativity?

If you’re Smule, you go and establish a second company as your first company’s evil twin. Then you release an application involving zombies in bikinis.

The new company, Smort, is everything Smule isn’t. If Smule were Mario (or Bender, or Darkwing Duck), Smort would be Wario (or Flexo, or Negaduck). It’s the classic doppelganger mechanic – just… in the form of a company. The creative brains at Smule are jam-packed with absurd (but still great) ideas – and for those ideas, they have Smort.

Smule actually launched Smort a few months ago, completely off the radar, with “Frog Guitar” – an app in which you played a guitar made of.. well, frogs. Presumably because it was still music-related (whereas Smort is at least partially intended to let them flex their talents in other categories), they’ve since pulled that app. 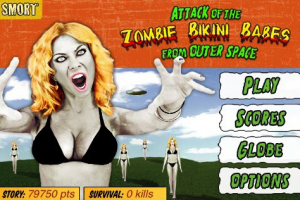 This morning, Smort is making its return to the App Store with the launch of Attack Of The Zombie Bikini Babes From Outer Space. Yep. You read that right. Smule Smort looked at some of the common elements across popular App Store games, and came back with a list: Bikini Babes, Zombies, Bombs, and Bloodshed. Then they jammed it all together. It’s an outlandish (but still tongue-in-cheek) jab at the state of the App Store, but it just so happens to be a pretty damn fun game.

In this game you play Pappy, a farmer set out to protect his property from an onslaught of Zombie Bikini Babes. You’re armed with a pair of dual-wielded slingshots, which you fire in quick succession by drawing back the pouches with your thumbs. You’ll quickly move up from firing rocks to firing everything from live animals to explosives, with a few special weapons tucked in for good measure. In short, the game is absolutely insane – just as Smort intended. Oh, and to kick the absurdity up one more notch: the part of the zombie is played by Marina Orlova of HotForWords fame.

When asked about the matter on the record, Smule vehemently denies any relationship with Smort.