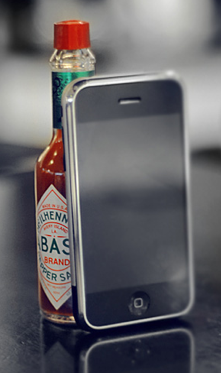 In just about every other movie or TV show we watch, at least one of the characters (if not half the cast) is rocking the iPhone. For example: Have you seen Chuck? If not, you definitely should — it’s a great show — but it has more Apples than Granny Smith.

Sooner or later, one of these shows is going to have a reason to destroy an iPhone on camera. Up until now, the prop folks have only read had two options: Smash a real iPhone to pieces, or recreate the iPhone in one-off prop form. Depending on the size of the production, either of those options might be a bit too pricey. Enter: the iPhone dummy.

It looks like an iPhone. It smells like an iPhone. But it’s certainly not an iPhone. Recreated to look just like Apple’s finest, the iPhone dummy is a $20 substitute for smashing the hell out of the real deal. Of course, it doesn’t actually.. you know, power up – so you might burn up all that money you saved paying someone to composite stuff if you need onscreen activity. If you’ve got a need for a lifeless iPhone-lookalike, check it out here – that is, if Apple’s IP guys haven’t gotten to it already.