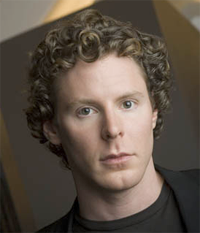 Sean Parker, a managing partner at Founder’s Fund, gave an interesting talk today at the Web 2.0 Summit in San Francisco. The key to it is simple: Facebook, Twitter, Apple, and eBay will dominate the web going forward. One company of note that won’t? Google.

Why? Parker believes we’re shifting from the first phase of the Internet, which was dominated by what he calls “information services” These are companies like Google and Yahoo. But next up to dominate the web will be the “network services” like Facebook and Twitter, he believes.

To be clear, he thinks Google will stay huge and relevant, but it’s dominance will go down because collecting data is less valuable than connecting people, he said.

He went on to talk a bit about the social networking space, which is significant because he helped found Facebook.

Parker noted that data portability is a red herring. Data portability is easily solved by converters and adapters, he said. Facebook has of course been criticized for being much more closed with regards to its data than many of the other social networks. In Parker’s view, it would seem that not only is this not a bad thing, but it will help them dominate, because it will force other users to join them. That’s something that I would bet a lot of people believe, but it’s interesting to hear someone like Parker be ballsy enough to say that.

He went on to say that Friendster was not a fad, it failed because of the failure to scale, not because of poor product execution. So how did MySpace fall? It was a “systematic product failure,” said Parker. And Facebook was smart to launch with the college campus networks. “College students didn’t have MySpace accounts, so we went for them,” Parker said. It was all about tightly spun networks at colleges, and that helped Facebook spread naturally and virally.

Parker also talked a bit about why it’s not always the best products that win. Craigslist, MySpace, AIM and eBay all were poorly designed or executed, yet they did well. This was because their networks were strong enough to overcome their bad products, Parker said.

Also of note was that one of Parker’s slides talked about the few networks Google does own, like Orkut. That slide seemed to imply that Foursquare is owned by Google, which of course is not true. Google did buy Foursquare co-founder’s Dennis Crowley’s former location company, Dodgeball, but they have since killed it. So in Parker’s view, Google is actually weaker than he thinks.

Update: Parker has written to let us know that he did, in fact, mean Dodgeball rather than Foursquare.