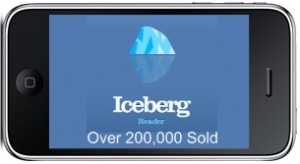 Amazon may have sold over a million Kindles and millions of e-books, but there’s another e-book reader that seems to be gaining some traction: the iPhone. And of the many e-book readers on the iPhone, ScrollMotion seems to be having real success with over 2,500 titles and counting. When we last wrote about ScrollMotion’s launch in December 2008, the App Store was a young lad and ScrollMotion had already signed up publishers Random House, Simon & Schuster, Houghton Mifflin, Penguin Group USA and Hachette. Now, with the App Store all grown up, ScrollMotion has expanded that repertoire and created a solid offering on the iPhone. Though they won’t disclose the actual sales numbers, CEO John Lema tells me they’ve sold more than a whopping 200,000 books on the store. Wowza – who ever said that screen was too small for reading? 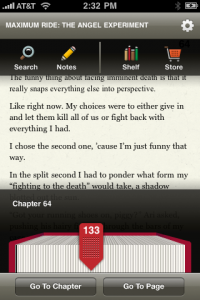 I’ve had the chance to test this app out over the last few days and it’s extremely well-done. The app allows you to write notes or place bookmarks in certain sections as well as browse the book through a table of contents or by selecting a specific page number. You can search the text of the book as well. The in-app store has tons of options and is divided into 32 categories including bestsellers, self-help, teen fiction, travel and history. The only complaint I have is that it was a bit difficult to figure out how to get to the table of contents and to the in-app store when you first open the app.

I’ll also add that the reading experience is better than Kindle for the iPhone. Specifically, the pages are much easier on the eyes because they have an off-white background instead of the Kindle’s pure white. The text was a lot more authentic, which is in line with what Lema told me is the goal of the company: to keep the reading experience the same as a real book. Obviously, the iPhone’s screen prevents that from becoming a reality, but the Iceberg Reader comes as close to paper as possible.

Many of us already read news on the iPhone, so reading books is not too much of a stretch. Granted, there are tons of dedicated e-book readers already on the market, but I don’t know that I want to walk around with a bulky Kindle, Nook or IREX when I’m on the go. For people like me, buying a book or two on the iPhone might make sense, though I can’t imagine having a large collection on my iPhone.

That said, Amazon and Barnes and Noble both have apps on the store, and the big issue for ScrollMotion is that their books often cost more than in the Kindle store. For example, Dreams of My Father by Barack Obama costs $14.99 via ScrollMotion’s Iceberg Reader [iTunes link], but only $9.99 on the Kindle Store. Similarly, Malcolm Gladwell’s Outliers costs $9.99 on the Kindle Store, but a startling $19.99 on the Iceberg Reader. However, most non-bestsellers show no significant difference in price, so don’t expect the trend to continue when you try to buy books that aren’t as famous. 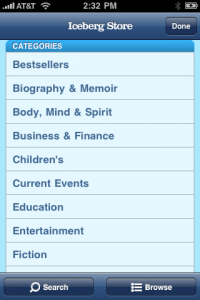 It seems like two major influences are causing the price difference. First, I have to assume that Amazon’s booming business affords it the ability to discount their books a lot more than a small publisher like ScrollMotion. Amazon’s sheer size and power is probably showing its face here; because they make money on selling the Kindle, they can sell premiere books such as New York Times Bestsellers at a loss. Just like Wal-Mart, Amazon is using “loss-leaders” to draw folks into their platform. Second, the Iceberg Reader’s in-app purchase still uses the iTunes store’s billing and payment system, which means Apple gets a 30% cut of the sales. The Kindle app, on the other hand, is free and you buy books directly from the Kindle Store. I assume that means they don’t give Apple anything. Bet Apple doesn’t like that too much. They’ve definitely shown their love for ScrollMotion, and may be their biggest advocate. They’ve featured ScrollMotion apps multiple times on the App Store, which can significantly improve app sales.

But despite the difficulties of taking on Amazon, ScrollMotion has sold over 200,000 books and that’s nothing to scoff at. Remember that most books are upwards of $10, which means they’ve sold almost $1 million worth of books. Add that to the fact that ScrollMotion has deals to create iPhone apps for People, Esquire, ESPN The Magazine, and Bon Appetit, and ScrollMotion is quietly running a successful indie publishing business on the iPhone. As ScrollMotion’s CEO puts it, “ScrollMotion’s goal is to allow people to read books wherever they are without destroying the experience.”