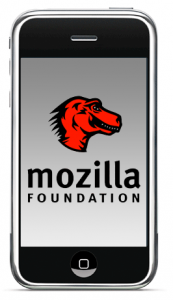 Whenever anybody from the Mozilla, the overseers of Firefox, gets to talking about iPhone apps, the geek-blooded world gets themselves all in a tizzy. As the mobile port of Firefox, otherwise known as Fennec, ticks away through the beta paces on Windows Mobile, Symbian, and Linux, iPhone owners care about only one thing: When do they get it?

Over the weekend, GigaOm spoke with Mozilla CEO John Lilly. He had this to say on the matter:

“Mozilla will release an app to the iPhone App Store in the next few weeks,” Lilly said. “It’ll surprise people.”

“An app”? Seems a bit vague – and that’s undoubtedly intentional. While it could be that Mozilla’s not in a place to officially confirm that Fennec is coming to iPhone, it seems far more likely that it’s not a browser.

While Apple has been approving “alternative” browsers, they’ve all been WebKit-based; in other words, they’re all using the same core engine as Apple’s own Safari. Fennec, like it’s older browser-brother, Firefox, uses the Gecko engine. Without Gecko, it’s not Firefox – and with Gecko, it’s not likely to reach the App Store.

So if it’s not Fennec, what are they planning? GigaOm went on to ask Lilly and Mozilla VP of Mobile Jay Sullivan about Weave and the Awesome Bar, Firefox’s bookmark hosting/history perusing tools. These questions were dodged, leading the interviewer to believe that the new iPhone product involved them in some manner.

Might Mozilla’s secret project be as simple as a Firefox-to-iPhone bookmark syncing utility? What are your guesses?