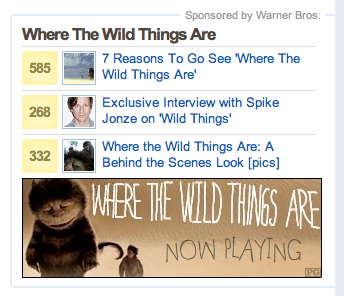 Last week, we wrote about Digg testing a new kind of ad that allowed sponsors to find previously submitted Digg content and and wrap it in their own ad unit. The first such ad just went live for everyone this morning. And it seems like a really great idea.

Since I wasn’t able to see the ads before, I wondered if the actual Digg content portion of the ad would link back to the sponsor or to the actual story. Not only does it link back to the story’s permalink page, but it routes it through a DoubleClick referral. So yes, Digg is keeping track of all of these clicks (though I’m told that right now the ads are on a CPM basis), while users are being sent to content that quite likely do actually want to go to. Win-win.

As you can see in the first such ad, for the new Warner Brothers film Where The Wild Things Are, the movie studio picked three previously popular stories on Digg about the movie. Each already had several hundred diggs before the studio wrapped it in the ad unit. One of Digg’s weaknesses is that once a story is off the main homepage, the likelihood that anyone is ever going to see it again goes way, way down. But this is a way for Digg to surface older content, while giving them a huge incentive to do so: Advertiser money.

Naturally, the ad unit also features a big graphic for the film as well. Clicking on this area goes to the movie’s website, just as you’d expect from a normal online ad.

While Google has made billions off of its contextual text link ads, overall advertising on the Internet remains a tough nut for many sites to crack. The simple fact is that some of the Google search result sponsored links aside, many users probably don’t really want to click on advertisements, and only do either by accident, or when they’re tricked (into thinking it’s content, or a game, or that they can win something free, or whatever). That Digg has figured out a way to get paid for what its users already click on, is very interesting.

The next question is, what happens if Digg strikes some deals to place these types of ads on other sites? Would users click on them, recognizing the Digg branding and realizing that they might actually like to see that content? Would advertisers still pay for that on a massive scale? That could be a billion dollar question.

Update: We were just told that for right now these ads are on a CPM basis, while the other Digg ads are CPC. Still, with Digg (by way of DoubleClick) keeping track of these clicks, they could very easily flip the switch and do CPC, assuming the advertisers played along with it, of course.