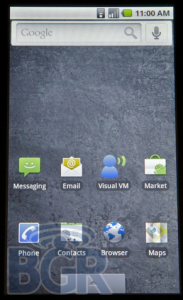 With Google having placed a canoe-sized Eclair on their lawn a few days ago, we know that the next update for Android (codenamed “Eclair”, version number 2.0) can’t be too far off. Google has kept their code surprisingly close to their chest, this time around; where as bits and pieces of each update generally show up in their code repositories to be explored months ahead of release, Eclair has gone mostly unseen.

Whether that’s because they wanted to keep things mum until the launch of the first 2.0 phone or what, we’ll never know – but either way, the cat’s out of the bag now. The Boy Genius Report got their hands on a Moto Sholes running 2.0, and gave it a fairly rigorous visual runthrough.

A lot of major components have seen major overhauls. Here’s the quick list:

Check out the full runthrough here.