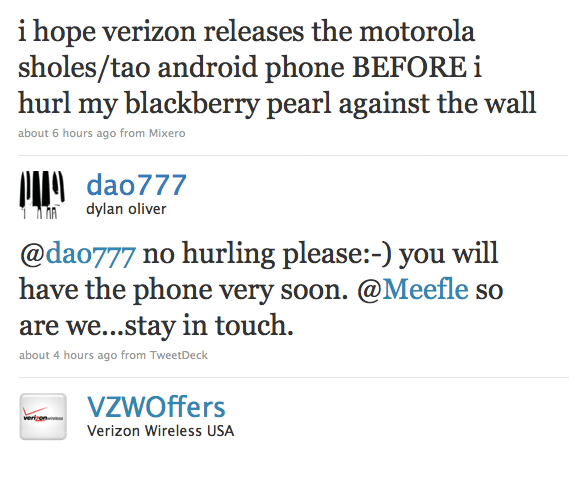 Considering that this thing has been spotted rocking the VZW branding countless times and Big Red’s own execs have been seen with them in hand, there should be all of zero doubt in anyone’s mind that the Motorola Droid (otherwise known as Tao, or Sholes) is destined for the carrier. With that said, it’s always nice to see official confirmation, and it just came. Was there a big announcement? Nope. Press Release? Nuh uh. Random tweet from VZW? Yep.

The good word came after our friend Dylan Oliver tweet-ranted that the handset’s impending launch being the only thing keeping him from hurling his BlackBerry Pearl into a wall. VZW was quick to respond:

no hurling please:-) you will have the phone very soon. @Meefle so are we…stay in touch.

There you have it, folks – straight out of the Big Red Horse’s mouth. We can only hope that “very soon” actually means “very soon”.