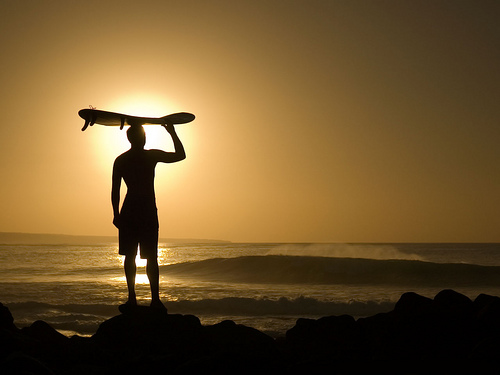 We’re now a little over a week into the extended roll-out of the preview build of Google Wave. This is an important time for the service because many people can now finally start using it as they eventually may — which is to say, with their friends and colleagues. Of course, the backlash is also already in full-swing, as expected. But I can’t help but wonder if this backlash and the hype that it is a byproduct of, is blinding some to the larger picture. Google Wave is not just a service, it is perhaps the most complete example yet of a desire to shift the way we communicate once again.

The Wall Street Journal has a long article about this today, noting “The End of the Email Era.” But most of that article is spent focusing on how Twitter and Facebook, which is to say, status updates and the streams, are replacing our need for much of what email has provided in the past. Only very briefly do they mention Wave. And I think that overlooks something.

For many of us, email is simply not cutting it the way that it used to. It’s a sedentary beast in a fast-moving web. It uses old principles for management, and this is leading to overload. I think the key statement in the WSJ is this:

We all still use email, of course. But email was better suited to the way we used to use the Internet—logging off and on, checking our messages in bursts. Now, we are always connected, whether we are sitting at a desk or on a mobile phone.

I would consider email to be a passive form of communication. I don’t mean that you don’t respond to it, I mean that you don’t have to respond to it right away. Instant messaging is at the other end of the spectrum. If used correctly, it’s supposed to be an “aggressive” or “active” form of communication in which you respond immediately. Twitter is very passive because the use of it is such that people don’t even necessarily expect a response of any kind, even if they point a message at you. Facebook is a mixture of all of those things (more on that below).

Google Wave is attempting to be a passive-agressive form of communication. You can actively (aggressively) engage in threads in real-time, or you can sit back and let messages come to you at your leisure (passively). Having used the product for a few months now, and after using it quite a bit more actively with my friends these past few days, I really think that Wave is onto something with this method of communication. I would argue that Google Wave’s new message alert system needs to be somewhat reworked or re-imagined, but I do think the desire to blend passive and agressive methods of communicating is there. 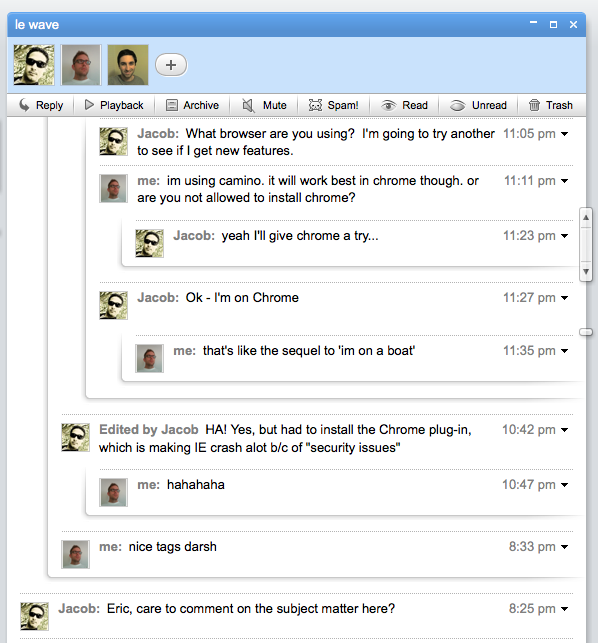 We’ve been slowly building up to a system like this. Gmail has for a while offered users a nice blend of email and instant messaging on the same page. And while it is nice that there is also the option to archive all your chats for searching purposes later, there is no good way to say, see that you missed an IM if you have a computer with Gmail open at home while you’re away and checking it remotely. You also can’t check these easily via IMAP on your phone, and the like.

And while there is the option to reply to emails by chat if that person is online, there’s no real integration between the email message and the IM message, they exist as two totally separate things. It seems like we’re at the point now where that shouldn’t have be the case.

Others, like Yahoo Mail, are now trying to tack-on status updates and the stream to email services too. The result is a Frankenstein-like service.

Facebook is another interesting example in that, as I mentioned, it combines all of these elements: Email, IM, status updates, and a stream. But the connection between all of these things in that system is loose at best. From a unified communications standpoint, Facebook is really kind of a mess. There are whispers of changes, and I hope that’s true, but I’m not holding my breath for a service with 300 million users to do something new and drastic that will alienate a certain (probably large) percentage of its base.

That’s why Wave is interesting. It’s backed by a huge company, Google, but it’s not trying to shove this upon all of its Gmail users. Instead, they’re going to slowly roll this out and see how users end up using it. And maybe more importantly, they want to see how developers start using it.

And that’s really a key that a lot of early users are overlooking. Right now, when people hear “Google Wave,” everyone seems to want to place emphasis on the “Google” part of it. But the truth is that the grand goal of the team behind the project is to emphasize “Wave” as both a platform and a new communication standard.

Whether Google Wave succeeds is really irrelevant. More important is if the idea of Wave does. Again, the idea of passive-aggressive communication.

Wave, the Google web-based client, will only ever appeal to a certain number of users. Does anyone really think that Twitter would be where it is today if they only had twitter.com? No. Wave desktop apps, and mobile apps, internal company Waves, and public Waves; it’s the platform, not the product, that’s interesting. Or, more to the point, it’s the key communication idea behind it.