The problem with magazines is that they are so very expensive to produce. All those writers, editors, photographers, and designers cost money. Even original news sites require a lot of resources to run. That is why Hearst is taking a different approach with a new site launching today called LMK (Let Me Know). It brings in a river of news and photos on 2.3 million people and topics from authoritative sources. In other words, Hearst is getting into the news aggregation game, but with its own high-design twist.

Each page, whether it’s about a celebrity, athlete, or company, pulls in news feeds and photos from the AP and Getty about that topic. LMK is licensing semantic filtering technology from Evri, which parses through the feeds and photos to help create the automated topic pages.

But LMK will also have specially curated pages which will have its own freelance editor and designers. The first enhanced topic page it will be launching is for U.S. college football. Bob Roe, a former assistant managing editor at Sports Illustrated, is the sports expert who will be overseeing the sports pages. Once the best sources for stories about each team, player, and coach are selected from both major news sites to fan blogs, Evri’s technology does the rest.

Whenever there is game against another team, LMK will also show the most authoritative news sources for that team in a “behind Enemy Lines” column. Each page will also show stats, photo galleries, and interactive data modules which illustrate information such as which starting players have injuries. Just mouse over their position, and you can see if they are scheduled to play and what injuries they have. Or check out the “big fat number,” which compares the total weight of each team’s offensive line.

The site also lets you drill down into individual player or coach pages, which again show a feed of the most authoritative news about that person and fun stats such as how much more each college football coach makes in salary than the head of the school where he works.

LMK is the first business to come out of Hearst Entertainment’s new digital incubator under deputy group head George Kliavkoff (formerly the chief digital officer at NBC, where he helped create Hulu). Hearst Entertainment manages the company’s stakes in various cable channels, but is also now incubating and investing in startups. Kliavkoff boasts that LMK has only one full-time employee. “There is no variable cost in this business.” LMK will launch other channels around reality TV, financial news, medicine, and more. 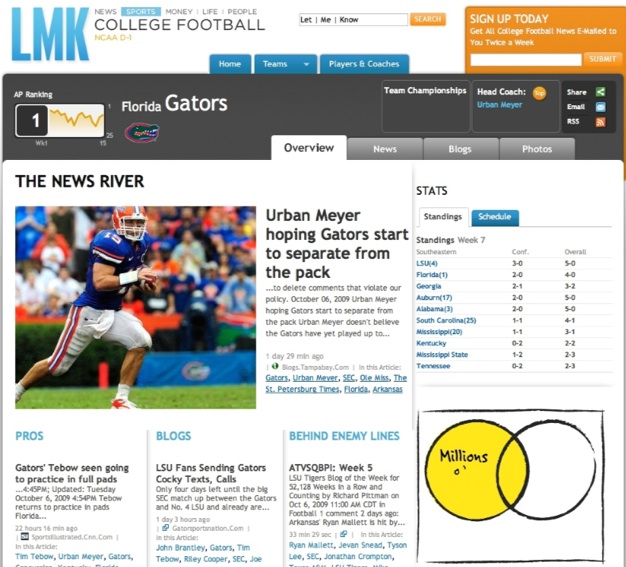 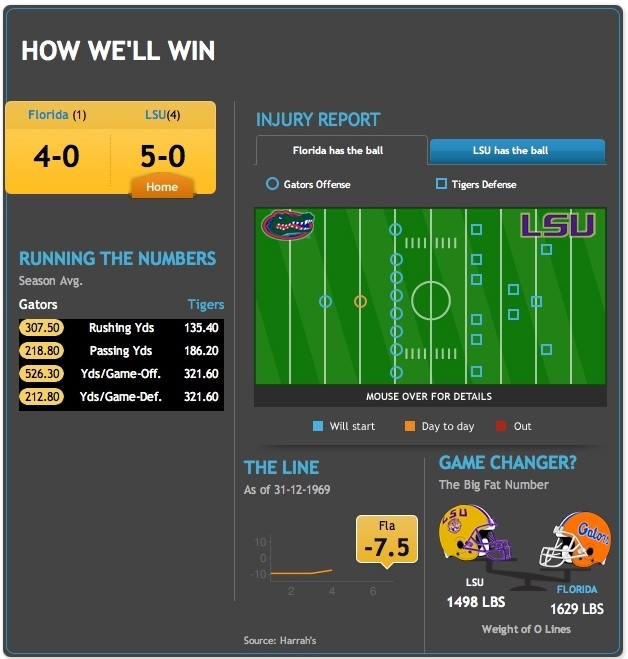