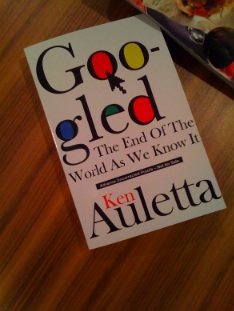 If Google were a sitcom, it would open every week with co-founder Sergey Brin arriving late to a meeting “out of breath in a T-shirt, gym shorts, and on Rollerblades.” This familiar depiction of Brin finds its way into practically every major profile ever written about the company, and so too does it dutifully roll into Ken Auletta’s newest book, Googled: The End Of The World As We Know It.

The first scene is a 2003 meeting with Mel Karmazin (then CEO of Viacom) at the Google campus with a sweaty Brin, Google’s other co-founder Larry Page, and CEO Eric Schmidt. At the end of a his visit, Karmazin tells them he is appalled that Google is “fucking with the magic” of the media business by actually telling advertisers which ads work and which ones don’t.

Auletta is a writer for the New Yorker steeped in the media industry, and while he spent a lot of time with Brin, Page, and Schmidt, his best stories like this one come from the titans of media he’s been covering and schmoozing with for decades. As such the focus of the book is on Google’s rise as a media company at a time when every other media company is feeling threatened by the Internet, and Google specifically.

Googled is not published yet, but I managed to get my hands on a copy of the uncorrected proofs. One of the most startling assertions Auletta makes right up front and repeats throughout is this:

In 2007, Eric Schmidt told me that one day Google could become a hundred-billion-dollar media company—more than twice the size of Time Warner, the Walt Disney Company, or News Corporation.

Later on, you find out that Schmidt qualified this statement with a list of very large businesses Google would have to enter successfully to some day get to that $100 billion figure. These include mobile, TV, enterprise, and existing bets like YouTube will have to pay off financially as well. All of this was part of a hypothetical “planning process where we said, is it mathematically possible for Google to become a hundred-billion-dollar corporation.”

But no matter, $100 billion sounds impressive. Auletta does a masterful job turning Google’s story into one that is about his favorite subject, the media firmament, and how Google secretly plans to shake it.

Auletta, however, is forced to hinge his narrative on quotes like that one from 2007 because Schmidt isn’t saying things like that anymore. Google is currently so vilified by the fearful media industry—from newspapers and book publishers to TV networks and movie studios—that Schmidt is bending over backwards these days to sound more conciliatory.

By media, Auletta means advertising, not content. Google is more than happy to leave the content production to others. The following passage is typical of how Auletta spins the Google story into the most epic media battle of our times:

Still, Page told me, he does not see Google as a content company. Google’s computers can “aggregate content; we can process it, rank it, we can do lots of things that are valuable. We can build systems that let lots of people create content themselves. That’s really where our leverage is.” Their leverage, inevitably, makes it easier for audiences to migrate away from old media. This will cause some distress, but satisfying everyone, including traditional media companies, is not Google’s goal, he said; serving users is. “You don’t want to do things the wring way that is causing real damage to the world or to people. But you also need to make progress, and that’s not always going to make everybody happy. Armed with this conviction, Page and Google’s engineers have made many media companies very unhappy indeed.

The scope of their ambition makes even other Internet entrepreneurs, like Marc Andreesen, suspicious of their motives. Andreessen provides one of the choicest quotes in the book:

“Their game plan is to do everything. Google is Andy Kaufman. The whole thing with Andy Kaufman is you could never tell when he was joking. Google comes out with a straight face and said, ‘We’re just going to be a search engine. We’re not going to be doing any of this other stuff'”—competing with advertising agencies, with telephone companies by getting into the cell phone business, with Hollywood, with publishers, with newspapers. “But I am quite sure they’re joking.”

Did Andy Kaufman ever wear Rollerblades?

The excerpts above give a flavor for the book and its slant, which alternately characterizes Google as both a growing media giant and a media killer at the same time. Auletta culls great fly-on-the-wall anecdotes from his sources, both at Google and at the media companies it may one day displace. But that is only one facet of Google’s incredible story. As such, Googled reflects the author’s lifelong preoccupation with the media industry as much as it reflects a complete picture of Google. But that’s why people read Ken Auletta books, to get that point of view, and for his exhaustive research and the riveting detail he brings to his subjects. And if it makes readers see Google in a new light, then it can be forgiven its overriding preoccupation.