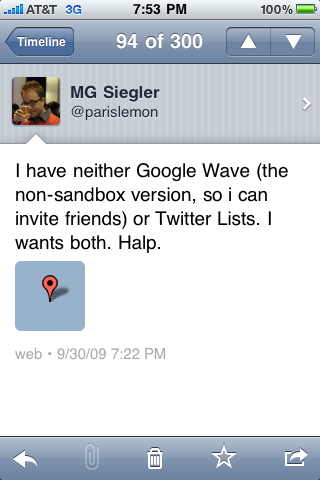 As we first reported last night, Twitter appeared to have turned on at least part of its new Geolocation API. Today, the company has confirmed the roll out on its API Announcement Google Group page.

As Twitter API team member Raffi Krikorian writes today, “as some of you may have already noticed, we’ve started going through the first steps to get the geolocation API out our door.” Last night, a portion of the Geoloction API got turned on and it slightly borked the new, still unreleased version of Tweetie. Basically, it looks like it turned on geolocation coordinates for all tweets, even if they weren’t meant to be enabled. This gave every tweet a coordinate of 0,0, which put them in middle of the ocean off the coast of Africa.

Tweetie developer Loren Brichter quickly realized what the issue was and corrected it. Other third-party developers we talked to noticed similar things. As such, Krikorian explains a bit more about how the Geolocation API will work today. As he writes:

if you start to pull status objects through the API, you’ll notice that, for the majority of them, there is an empty <geo/> tag and for the user objects there is a <geo_enabled> tag that is set to false.

for clarification: the <geo_enabled> will always be in a user object reflecting whether the user has opted-into the geolocation API.  there will also always be a <geo> tag in the status object regardless of whether there is a location attached to the tweet or not.  if there is no location, then the tag will be empty.  if there is a location (as above [here]), then the tag will be populated.

So it would appear that some of these apps weren’t taking the <geo_enabled> tag into account, and it may have been automatically setting it to ‘true’ which would then populate the <geo> tag with the 0,0 coordinates, since there was no actual geolocation data to share.

But, to be clear, the <geo> tag will always be there whether <geo_enabled> is set to ‘true’ or ‘false’, but if it’s ‘false’, it won’t be store any data and will self-close, I’m told.

Krikorian suggests that there have been some slight last-minute tweaks to the Geolocation API and that these are still in internal testing, but that they will be turning it on for a general audience “soon.”