Ah, the Windows install process. Long associated with repeated clicking of the “Next” button, it’s also home to one of the more shady practices to exist in modern software: the bundled application. Hapless users looking to get through the process as quickly as possible inevitably wind up installing some junk software that they don’t really want or need, only to scratch their heads when their browser is suddenly slowed down by a clunky new toolbar. Users may not like them, but many developers don’t want to scrap these bundled software packages entirely because they’re a steady source of income. OpenCandy, a startup that launched last year, may offer the solution by pairing up users with software they might actually want. And today it’s announcing that it’s been integrated with the latest version of PrimoPDF by Nitro PDF, the most popular freeware PDF creator.

We’ve written about OpenCandy before, when it made the revolutionary decision to ban germ-spreading handshakes from company board meetings, but until now we haven’t explored the company’s product. From the user’s perspective it’s quite simple: when you go to install an application that uses OpenCandy, you’ll be presented at some point during the install flow with an option to install a sponsored application. It may sound just like those unwanted app installs that we’ve seen for years, but it has a few key differences.

First, everything in OpenCandy is opt-in. While many apps default to the “install” option for these tag-along apps (which is why people accidentally install them), OpenCandy makes you click a checkbox make sure you really want the app. The company is also doing its best to only work with high quality applications — co-founder Chester Ng says that OpenCandy will only work with high quality publishers, and only suggest applications that it thinks people might want to actually use. Some apps that are currently being advertised through OpenCandy include doubleTwist and TuneUp— both apps we’ve covered before and don’t come with any nasty spyware.

OpenCandy also brings some intelligence to the install process. Rather than bundling the same applications every time, OpenCandy rotates the applications it advertises, effectively serving as an ad network. It also tries to apply some intelligence to the process, suggesting apps that are complimentary to what the user is installing instead of choosing one at random. And unlike some of the bundles that include these tag-along apps as part of the initial download even if you don’t want them, OpenCandy only downloads one of these apps after you’ve stated that you want it.

Finally, OpenCandy doesn’t collect any personally identifiable information. It does, however, collect some basic info (like whether or not the user decided to install the suggested application or if it wasn’t compatible with their computer). This helps them suggest better applications in the future, and Ng says that if an app is clearly underperforming (i.e. people don’t want it), OpenCandy will remove it from their list.

This is obviously a tricky area — some people object to the idea of upselling applications during the install process at all. But provided it is consistent about advertising high quality apps, I think OpenCandy may be a good compromise: developers will still get paid for including these ads in their installers, and users may just stumble across a new application they actually want. 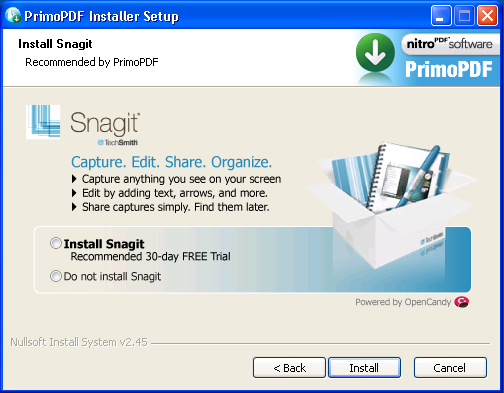