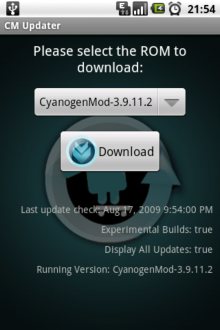 After Google dropped the L-bomb on Cyanogen, he reportedly opened up talks with the boys in Goo. It sounds like they may have finally reached a compromise in their little disagreement.

So the Cyanogen mod is back. It’s just slightly scaled down. Google didn’t like the fact that the mod builder was providing copies of their pre-made applications with his mod, so they made him remove them. Doesn’t make much sense really, since they come pre-installed in the actually Android phone. The mod builder has said that in order to install his mod in the future and still retain those applications, you’ll need to make a backup. And yeah, he’s working on a way to do that automatically.

In other words, if you want Gmail, GTalk, and Google sync, you’ll have to install the Cyanogen mod, and then reinstall those components. Not the most elegant solution, but it beats being shut down entirely.

So while Google might have been a little heavy handed in their approach, it sounds like the end result will be ok. We’ll just have to be patient and let things work themselves out.