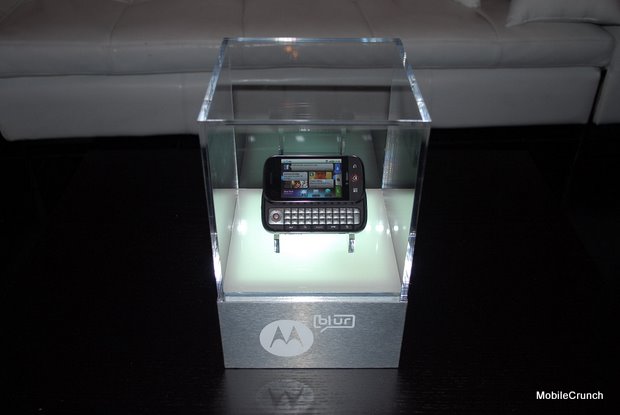 Motorola has got a thing for four letter words. No, no – not those words. You know, device names like RAZR, ROKR, etc. Thus, it came as no surprise that its first entry into the Androidian landscape, which was announced earlier this month, is yet another four letter word: CLIQ.

Although not expected to ship until sometime next month, the ever-resourceful Boy Genius has got his hands on a pre-release CLIQ and has been kind enough to share some insights.

Feel free to read through the whole dang thing, or if you are more a CliffsNotes kinda guy or gal, just take a quick spin through our recap:

Hardware:
As we noted in our first look, BGR thinks the CLIQ has a solid feel to it, albeit a bit plastic-y, with a good slider mechanism and a responsive but cramped capacitive touch screen display. He isn’t as keen on the keyboard as many early reviews, citing hard, cheap plastic keys, and apparently the battery life is just plain awful (possibly an early software bug).

MOTO BLUR:
BGR has mixed feelings on MOTO BLUR, Motorola’s new UI/modification for Android. The good: Motorola has done a good job of implementing its Android mods to maximize the phone’s hardware. The bad: BLUR’s attempt to simplify our social networking lives is more of a valiant effort at the moment than a fully functioning, life-altering organization tool.

The overall bottom line is that with some software tweaks, this isn’t a bad start for Motorola and Android, but its definitely not quite a full-baked concept, yet. For more, head on over to BGR for the rest of the in-depth MOTO CLIQ preview.