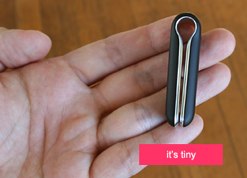 Fitness gadget Fitbit was a hit at last year’s TechCrunch50, where it created a ton of buzz and was a runner-up for the top prize. Of course, we all know that it takes hardware companies longer to launch than software startups and since last September, Fitbit has been working tirelessly to refine the product, establish distributions channels and tweak its online platform. Now we won’t have to wait any longer, since Fitbit will officially open up to the public on Tuesday. The site you see currently is the beta version and will feature a redesign as well on Tuesday.

So what does Fitbit do? The sleek little device clips onto your clothing and tracks your movement, sleep and calorie burn throughout the day and night. Fitbit, which costs $99, uses the information it gathers about your movement to help you determine how much exercise you’ve been getting and how many calories you’ve burnt. It can also tell you how many steps you have taken and how well you’ve slept, all based on its internal motion detector. By clicking a little button on the device, you’ll see a small blue LED screen that will alternate between the steps you’ve taken, the calories you’ve burned, your distance, and gives you a gauge of how high your activity level is. This is shown via a small flower that will grow as you exercise more (though I’m told that you will be able to switch your icon).

Here’s the really innovative part—the device is wireless so all data gets automatically synchronized to your computer and then the web through a wireless base station, so you don’t even have to plug it in. If you are within 10 feet of the device (it plugs into your computer via a USB cord), the station will sync with your device. In order for the wireless functionality to work you need to install a syncing software that runs on both Macs and PCs. Once synced, you can view your health dashboard online.

The dashboard is fairly simple and organized. You input your age, height, weight, and gender and are given basic info of how many steps you’ve made in a day and a breakdown of how active you are within the day, showing the highs and lows of your activity. The site will even break down particular activities and measure the intensity of workout. In terms of caloric burn and intake, Fitbit will calculate how many calories you burn in a given day, and if you log in your nutritional info, will also compare that to how much your intake was, making it ideal for anyone who wants to lose weight. And Fitbit has made it easy to input any type of food by already integrating the nutritional value of most types of food, cuisine and even restaurant chain foods, which cuts out a large amount of work for you. 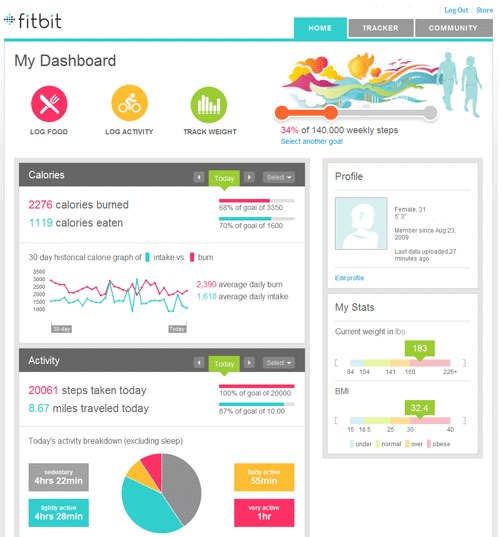 One of the features that I find particularly compelling is the ability to monitor your sleep pattern. If you wear the device while sleeping, it will give you a snapshot of your “sleep health.” As you fall in and out of sleep, the Fitbit tracks the movements that your body makes and can tell you how long it took you to fall asleep, how many times you woke up throughout the night and the actual time you were asleep vs the time you were in bed. You will be able to see all of this detailed information on your dashboard. And to make sure that the device is comfortable for people to wear during the night, you can slide Fitbit onto a wristband that is provided.

Fitbit’s co-founder and CEO, James Park, told me that when it comes to running and walking, Fitbit is 99 percent accurate in its reporting of steps and 90 percent accurate for caloric burn. But Fitbit isn’t as accurate for other types of activities, like weight-lifting and biking. To mitigate this problem, the online dashboard lets you input exercise types and times manually and Fitbit will calculate how many calories you burned based on health information it has collected.

On Tuesday, the site will be open to the public and all of those individuals who pre-ordered the device over the past year will finally receive their Fitbit. While the site will be the only place you can order the Fitbit, Park says that in Q4 you’ll be able to buy the Fitbit online and in retail stores but declined to name which stores he’s partnered with. Fitbit raised a cool $2 million last October and Park says they are looking to raise more to up manufacturing and distribution channels.

Fitbit will also become more social, letting users form groups where they can compare their fitness goals and activities. The site will also take a page out of Mint.com’s book by letting you compare your activity and fitness with other anonymous people who have similar weight, height, and gender. While using the personalized dashboard is free, Fitbit will soon be rolling out premium paid features such as customized fitness coaching and guidance.

So what’s the competition? There are similar products on the market that offer the same functionality as Fitbit, such as the Philips Activity Monitor or the BodyBugg or Nike/iPod gear (which doesn’t measure sleep patterns). But the beauty of fitbit is in it’s pricing and in its sleek structure. It fits in any pocket and is so small and unobtrusive that it could be hooked into a bra. Both the Philips and BodyBugg products are bulky, making it difficult to wear 24-hours per day. The advantage of the BodyBugg is that it measures calories burn by heat, which is a more efficient and accurate way of measuring calorie burn. Fitbit counts calories via motion, but that’s also why it’s easy to wear.

I wasn’t at TechCrunch50 last year but after seeing a demo, I’m already excited about this product after being frustrated with the limitations of pedometers that I’ve used. The ability to wirelessly connect to the online dashboard takes a lot of the work out of actually making sense of the data. And being able to understand your optimal balance of diet, workouts and sleep is valuable. It seems that Fitbit was worth the wait.