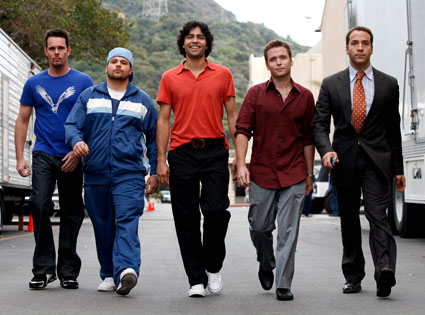 Foursquare is the location-based iPhone app getting a lot of love in the press (and from VCs) these days. And while there is no shortage of location social networking apps in the App Store, Foursquare works well on the platform because it’s based on the active checking-in to venues, which is perfect since the iPhone doesn’t allow apps to run in the background (though Loopt has a workaround). While Brightkite has also long been in this space, it’s been a while since any new viable competitors have come along. But we recently got two more: Gowalla and Going.

Going, which is an app made by AOL’s Going.com site, has one great feature going (see what I did there) for it. When you check in to a place you can set a “How is it right now?” slider to tell your friends either “Don’t Come”, “Eh”, or “Get Here Now” (or anything in between). That’s a great idea, and something all of these apps could benefit from. A lot of times people will see that I’m checked-in somewhere and may show up, but just because I’m checked-in somewhere that doesn’t mean it’s great, just that I’m there, for some reason.

I also like that you have to “leave” a place you’re checked-in before you can check-in some place else. Though I suppose that checking-in another place means that you’ve left your previous place already. 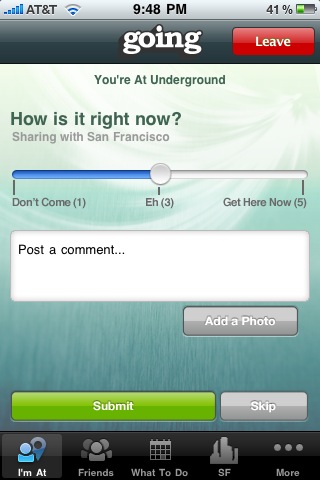 The main problem with Going is that it has too much going on. One reason that I think Foursquare works is because it’s so simple. Going may be trying to do too much by wrapping personal check-ins, with events, and photos, and city-based public streams, etc. I’m not sure people are really ready for all of that just yet.

There also doesn’t appear to be a way to easily add new venues to the listings. Going’s list of places is pretty good, but it’s definitely not complete, so if a place you’re at isn’t on there, there’s no checking-in for you.

Going is potentially interesting for its events calendar. If Yahoo would have ever made an Upcoming app that just did events, I think people would have definitely used it (it may be too late since Facebook’s app finally got that funtionality). But the events area of Going is nice because you can see a list of things happening on any given day and RSVP to them with your name with a couple of clicks.

Gowalla is more directly akin to Foursquare. Basically, like Foursquare, it’s an app that allows you to check-in places and rewards you for it. Instead of badges, you get stamps for going certain places. And you obtain items that you then leave other places.

The main difference is that rather than relying on users to enter addresses for places manually, as you do with Foursquare, Gowalla pulls the GPS coordinates. This is both a strength and a weakness. On one hand, this makes it slightly harder to cheat, but on the other hand it also makes it harder to check-in places — especially if you’re inside, which you are going to be most of the time at venues, obviously.

When I was first testing out the app a couple weeks ago, it was nearly impossible for me to check in anywhere due to the GPS issue. But since then, the Gowalla team has rolled out some updates using what it calls “elastic GPS,” which has improved things greatly. That’s especially true when you’re trying to add a new venue to Gowalla’s directory of places (which is otherwise very easy to do). 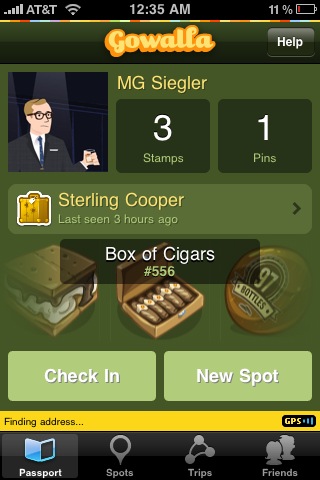 One thing that sets Gowalla apart (other than the GPS thing) is its emphasis on trips. It has a special area dedicated to user-generated treks made by people in various cities. For example, one of the trips recommended for me in San Francisco is the “Golden Gate Gallop,” which is a 18-stop trek that takes you to various venues around the water in the city, leading you to the Golden Gate bridge. The fact that any user can make these and share them with other Gowalla users is pretty cool.

One major problem users have with Foursquare is that it’s still limited to a handful of select cities. Gowalla has no such restriction, and anyone can start using it anywhere, populating maps with venues as they go. Foursquare eventually plans to implement something similar, but if you’re not in one of the cities that it’s in just yet, Gowalla is likely to be very compelling to you.

Something I also noticed about Gowalla as compared to Foursquare is that there seems to be more of an emphasis on you rather than your friends. The main screen in Gowalla is your passport features your stamps and items, and your check-ins. With Foursquare, the main page is your friend check-in stream. Foursquare’s approach seems like a better idea if you want your app to be as social as possible (which is the only way any of these apps are going to find success).

I’m also not a fan of Gowalla’s overall design. The shades of green mixed with yellow, mixed with large item icons, is a bit too garish.

So the obvious question is, do either of these apps stand up to Foursquare? The short answer is that Gowalla has a chance, while Going likely doesn’t.

The key to all of this is the gaming aspect of each app. Gowalla, like Foursquare, has one, while Going really doesn’t. Again, Going could work as an events app, but it’s got too much else going on besides that. 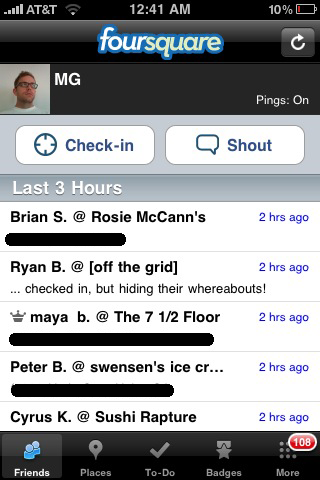 Both Robert Scoble and The Next Web have written up Gowalla over the past couple of days. Scoble thinks Gowalla won’t be able to compete with Foursquare, while Zee from The Next Web actually likes it more. I agree with Scoble that the GPS thing, which may seem like a plus, will likely end up hurting it. Sometimes people want to check-in some place but want to be kind of vague about where they are, you can’t really do that when your location is tied to your GPS coordinates.

Zee, of course, has a good point about the availability around the world. But as I said, Foursquare will likely change that soon. The question then becomes will Gowalla be able to attract these worldwide users before the more buzzed-about Foursquare greatly expands?

Beyond a loyal user base, Foursquare’s real potential lies with its business partnerships. That is likely to ultimately decide if the company sinks or swims. Gowalla doesn’t yet have any of the “mayor deals” that Foursquare offers, and their icon gifts can only go so far before users will start wanting tangible gifts for playing the game if Foursquare is offering them.

Another key is that Foursquare is quickly expanding beyond the iPhone. They already offer an Android app and Blackberry and Windows Mobile are coming shortly. Gowalla is currently only on the iPhone.

Still, it’s good to new entries in the social location space. Both bring some interesting new things to the table; particularly Going with its “How is it right now?” feature and Gowalla with its “Trips” functionality.

You can find Going in the App Store here. And Gowalla here. Both are free apps.