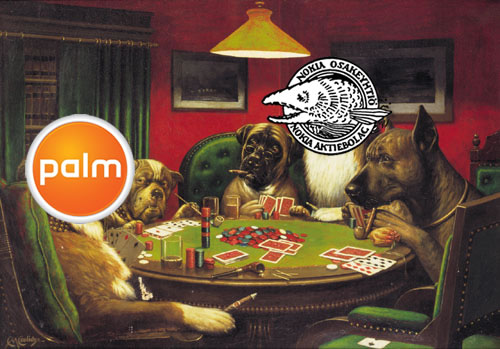 Another day, another merger rumor. The once-mighty handset developer, Palm, Inc., announced an increase of its public offering of common stock to 20,000,000 shares, @ $16.25/share. This news has spurred rumors of a possible bid on Palm by the Finnish mobile powerhouse, Nokia.

James Faucette, an industry analyst at Pacific Crest Securities, thinks the idea of a merger makes a lot of sense. He explained to Bloomberg:

“Palm is worth $17 a share on its own, and $25 to $30 to Nokia, based on what they are spending to replicate Palm,” said Faucette. He rates Palm stock “outperform” and doesn’t own shares. Such an acquisition “would make a lot of sense,” he said.

As for the increased offering, Palm is looking to cash in, expecting to receive net proceeds of approximately $313.1 million. Palm expects to use the proceeds for “working capital and general corporate purposes.”

Neither Palm nor Nokia would comment about the rumor. To be honest, this one seems a bit bonkers to us – but we’ll see.