First, the launch of the new API is “close at hand.” In fact, Molina notes that users may already be seeing the new style retweet/status messages from users who are currently testing out the feature.

Second, and more importantly, Twitter is making a pretty significant change to the API prior to launch. Previously, Twitter was requiring third party developers to check whether a tweet has already come in or not in any users’ stream to see if they should collapse it under the new retweet structure. Now, Twitter has built its own mechanism to check for those duplicate tweets into the API. This will ensure that only the first tweet is shown and the retweets go under it automatically.

Interestingly enough, Molina notes that this will only gather up to 100 retweets. With our TechCrunch account, we often see many more than that, so it will be interesting to see how it handles that. As I read it, it may just cut off the retweets beyond 100, and simply not show them, which seems fine. Oddly though, in the image below, you’ll notice a “100+” note on Sarah Silverman’s tweet. Perhaps it notes that many, but will not show them.

Molina apologized to developers if they had already been doing work using the old method with the Retweet API. You can find the API documentation here.

And Twitter has also shared a picture of how the functionality may look on Twitter.com. Obviously, things have changed since the initial announcement. Note the icons now under tweets, as well as the Retweet tab system. It’s important to note that this view is not the main Twitter stream, as you can see on the right hand side, this stuff resides in a new “Retweets” column. Molina notes that this is just one potential mock-up for how it will look on Twitter.com. 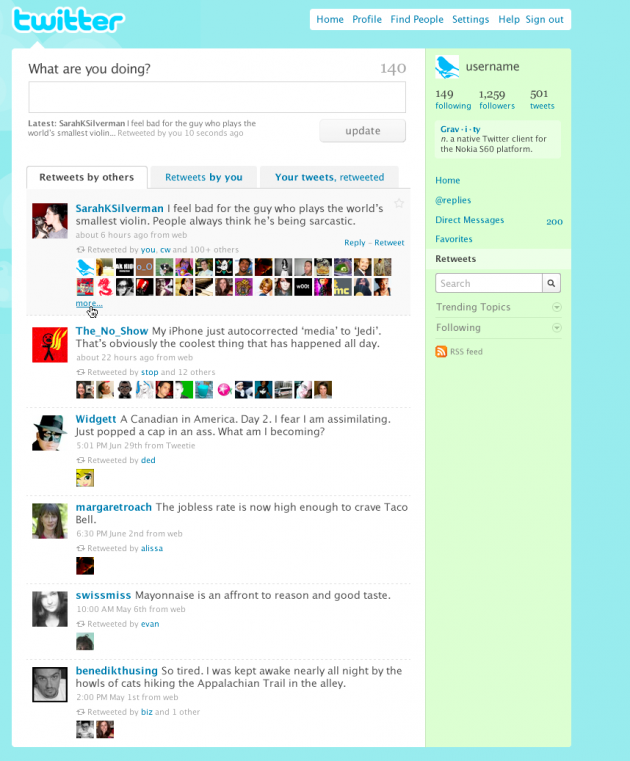