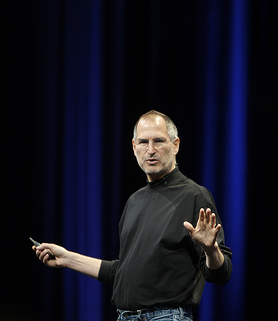 A video took the web by storm today entitled “Incredible, amazing, awesome Apple.” Basically, it boils down Apple’s latest event into a series of superlatives. It’s a funny video because Apple really does have a pattern of using these types of words over and over again in its demonstrations. Cynics will say this is how Apple brainwashes the masses into buying their products, and gets people jazzed about the tiniest features. But I think there’s something much deeper here.

While certainly there is some element of hearing something so many times that you start to believe it, that’s nothing new, any good salesman will do the same thing. But why I think the tactic works so well with Apple is because they actually believe what they’re saying. Just watch Steve Jobs in that video. It sure seems like he’s damn sure that what he’s talking about is amazing. He’s excited about it. So is Phil Schiller and the others on the Apple team. And that excitement translates on a level unseen.

This is hardly an Apple-only phenomenon. They’re just one of the best at translating their enthusiasm on a big stage several times a year thanks mainly to the charismatic Jobs. But really, I think you’ll find in most successful companies, the enthusiasm about their product is a key to how well that product is doing.

Another good example is Twitter. I’ve had to opportunity to meet a lot of Twitter employees over the past few years. One thing I noticed about each of them is their passion and excitement for what they’re doing. Certainly, if you look at it from the outside, the concept of Twitter was something that was just as likely to be a complete failure as it was a success. But the people running it and even the newest employees have a passion about it. When co-founder Biz Stone says he thinks Twitter can change the world, it may sound crazy, but it’s not, because he believes it.

Speaking of the newest employees, Twitter’s new COO, Dick Costolo, just started at the company recently. During TechCrunch50, he was asked on stage why he joined Twitter. After all, he had sold his previous company, FeedBurner, to Google for $100 million, and upon leaving Google, he probably never needed to work again. But his response is telling, “My first reaction was, you don’t get a chance to work on potentially one of the pivotal companies.”

He’s not going to work at Twitter for the paycheck, he’s going to work there because he believes in what they are doing. And that enthusiasm can only further the company.

This type of enthusiasm also seems to be prevalent at companies like Facebook, Netflix, and Zappos (which was of course recently acquired by Amazon). And not surprisingly, people seem to love working at those companies.

For a long time, Google was in that realm too. To some extent, it still is, but as it gets bigger and bigger, there seems to be no shortage of people who leave, discontent. Google is still making great products, but whenever you have talent leaving, for whatever reason, that’s not a great sign. Maybe Google can overcome that, but you simply can’t discount the recent talk about a possible Google decline.

Not to single out Yahoo, but they are one company where employee enthusiasm has seemed waning in recent years, to say the least. It’s hard to know if that started before or after the great products stopped and it fell into decline, but it’s a serious problem, nonetheless. That’s not to say no one is enthusiastic about being there, but I do get the feeling that plenty are there simply to get a paycheck. And a company will never win that way.

Microsoft is more of a mixed bag. There are plenty at the company who love it passionately. Most notable of these is of course, CEO Steve Ballmer. While I don’t believe he’s being disingenuous with his Microsoft zealotry, I know that his passion is not shared by everyone at the company. And I believe that translates one way or another to the public (be it by sub-par products, or other less tangible means). And to some extent, that may be why we don’t see the same type of “fanboy” fervor that a company like Apple gets.

But you’ll notice a common theme among the last three examples: They’re all huge companies. It’s undoubtedly very hard to keep everyone happy and on the same page about the products as you grow in size. That’s really why Steve Jobs is more important to Apple than doing any tangible work he may be doing. He is the glue that seems to make enthusiasm stick at the large company. When he wasn’t there in the mid-1980s to the mid-1990s, things went downhill, and undoubtedly the enthusiasm went downhill.

It was interesting talking to startups at TechCrunch50 this past week. A lot of them seemed to have the passion for what they were doing, and that was great to see. But I’m not sure that all of them did, and I have no doubt that those companies are going to be much more prone to failure.

My point is an obvious one, but I think it’s often overlooked. Enthusiasm and passion are so important, no matter what you do. If you don’t feel like you have that towards the company you are with, you should seriously consider leaving. Of course, there is something to be said about a paycheck, especially in tough economic times, but if you have the means and are simply spinning your wheels doing something that you don’t believe in, you’re really not helping anyone, and especially not yourself.

And you’re not helping us, the public, either, because if you’re not enthusiastic about something, we’re certainly not going to be.

Better yet, if you have the power in your company to start something that you are passionate about, do it. Even if it’s something that seems silly, like say, Twitter (which of course, started as a side project at Odeo), your enthusiasm about it just may push it through. And it may slowly bubble up into something bigger. And it may just blow up into the next big thing. Because enthusiasm translates.