Imitation isn’t always the sincerest form of flattery, and this is certainly the case for Microsoft in the development and launch of its web-based browser versions of Word, PowerPoint, Excel and OneNote. All based in the cloud, the web-based versions of these products, which are aggressive competitors to Google Apps, have fewer features than their desktop cousins but still give users basic tools to edit and change documents in the cloud. We wrote about these products during Microsoft’s announcement about the new features of Office 2010 back in July. Today, Microsoft is officially rolling out the FREE web-based version of its Office suite, which is officially called Microsoft Office Web Applications, to a select amount of Windows Live SkyDrive users in anticipation of the public release in the first half of 2010.

Microsoft Office’s move to the cloud isn’t surprising. Facing challenges from Google’s browser-based Apps products and its new Chrome OS, Microsoft is under pressure to make its three screens strategy, which is the ability for products to synchronize across the phone, browser, and desktop, a successful reality. We received a hands-on demo of the SkyDrive-based, collaborative web-based apps (our previous demo in July was for apps based on Microsoft Sharepoint) and I must admit, it’s impressive. Here’s a comprehensive view of what to expect at some point next year:

Microsoft Office Web Applications will be a part of Windows Live SkyDrive, which is an online file storage provided by Microsoft. Users sign in to SkyDrive by using their Windows Live IDs so anyone who has a Windows Live account will be able to access the free web-based versions (Microsoft currently has 500 million Windows Live customers). All of the documents and files created and stored in the office suite will be hosted in SkyDrive’s 25 GB of free online storage.

It’s important to note that SkyDrive is for or non-enterprise users. Microsoft’s Web Applications will also be available in its secure, behind the firewall storage system Sharepoint which will eventually have integration with Windows Azure.

When you sign into SkyDrive, you click on the “My Documents” tab which will take you to you an interface where you can create, share and edit PowerPoint presentations, Excel spreadsheets, Word documents and OneNote files.

All of the applications are shareable even if the recipient doesn’t have Microsoft Office’s web-based or desktop applications installed on the computers. So you can share a web-based PowerPoint presentation with an individual who doesn’t have PowerPoint installed on his or her computers. Also, in order to share a file, you type in the recipients email address. The recipient doesn’t need a Windows Live account to see or comment on the file.

Microsoft has made it very simple to switch between the desktop and web. In the browser-based version, you simply click an “Open in PowerPoint” button and the desktop version will open up the file. If you make any changes to either the desktop or web-versions of a presentation, your file will be saved on both platforms simultaneously, making the transitions seamless. It’s ideal for presentations (think Web-Ex), where you have more functionality to play with in the desktop version (giving you the ability to create sleeker decks), but can easily share and save comments and edits during a live presentation. 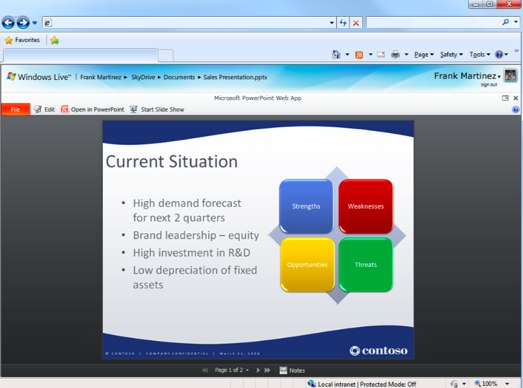 Similar to PowerPoint, the web-based version of Excel is a lightweight application that offers the basic features. You can modify data, make formatting changes, enter new columns, create new headers, change colors and sort and filter data. One key lacking feature in the web-based product: the ability to create charts. This is a significant part of the Excel’s desktop version that’s missing from it’s browser cousin. Of course, if you create a spreadsheet with charts in the desktop version of Excel, the file will look exactly the same in the web-based version, but you won’t be able to re-create charts.

But whereas there are limitations in the creation of spreadsheets, Microsoft has possibly made up for this in its collaboration sharing capabilities. Spreadsheets can be edited by multiple users in real-time. And spreadsheets can be shared and commented on by anyone, even those who don’t have the desktop version of Excel. 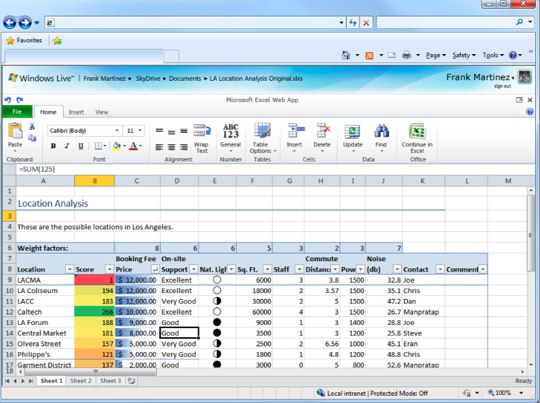 Documents in the Word desktop application look exactly the same in the web-based version and can be shared and commented on by anyone. If you have Microsoft Silverlight installed on your computers, you’ll have the added bonus of being able to zoom in and out high degrees.

In the version that will be rolled out to beta testers today, the the web application of Word and OneNote will not be feature the ability to edit but this functionality will be available when the products are launched next year. Unfortunately, the real-time collaborative editing feature of Word is missing in this version, but the hope is that this will be added next year as well. 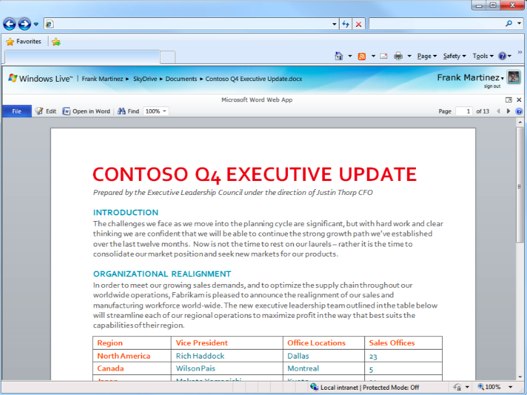 We mentioned in our original post in July that the ability to use products across the OS, browser, and mobile device is a key part of Microsoft’s strategy. We actually demo’d the Sharepoint-based version of PowerPoint on an iPhone and it was disarmingly sleek. While this functionality has already been established for Sharepoint, the SkyDrive-based apps are still being developed to work on mobile browsers. Microsoft says it will be done by the time the product launches next year.

Microsoft says it will be adding beta testers in waves of 1000 users until the product launches. There’s no doubt that the web-based apps are impressive. And the ability to seamlessly switch between the desktop and web versions is key, and one that Google currently can’t compete with. But one of the important innovations that Microsoft has made in this consumer-facing version is the sharing and collaborative features, which are certainly the future of any professional applications suite.

As we wrote in the past, Microsoft’s move to the browser could pay off in a big way, especially when it comes to giving Google Apps a run for its money. Microsoft seems certain that Microsoft Office Web Applications will be popular amongst students, which is a sector that Google has been gaining traction. But the more successful Microsoft is in its browser strategy, the more they validate Google’s approach in the space, which will eventually put price pressure on Office. Let the wars begin.