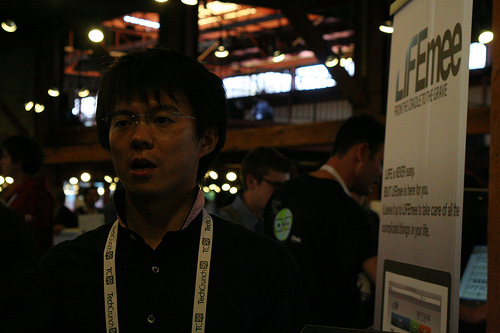 Nearly 130 million people use the web in Japan and Korea combined, with Japan itself boasting the world’s third biggest Internet population (94 million users). But getting exposure on an international scale is a big problem for globally positioned web startups in these (and many other Asian) markets.

TechCrunch50 has always been very welcoming towards companies from countries other than the US. Last year, for example, a total of five companies from Japan made a showing at the event (three startups presented onstage, two were in the DemoPit).

These are the four noteworthy Korean services that made it to TechCrunch50 this year:

Sealtale (TechCrunch50 finalist)
Launched by six college students, the Korean version of Sealtale, a social widget service, has attracted 200,000 users in six months (the English version launched Monday on TechCrunch50’s first day). Sealtale lets users express their interests, preferences or causes via so-called seals, which are interactive widgets. You can integrate these seals into your blog or profile page on a social network and interact with other people within the seal itself. The system works across various blog platforms and social networks. The seals can include content like text (RSS feeds, comments, posts), audio and video files.

Sealtale allows you to design and distribute your own seals, too. Companies can create branded seals and use them as viral marketing vehicles. A movie studio, for example, could create a seal for one of its movies and provide trailers and text-based information for users who choose to show that seal on their blog.

FillThat (DemoPit company)
Monetizing blogs is notoriously difficult. FillThat intends to solve this problem by creating a revenue stream for bloggers within a blog’s commenting space. The way it works is that you buy virtual currency (“Fill Dollars”) with real money and then pay for your comment to boost visibility (it’s also possible to achieve this by taking action, i.e. completing an offer). FillThat will go live next month.

Touchring (DemoPit company)
Touchring wants to bring voice communication into the social space. The Flash app makes it possible to call up friends over so-called Touchrings, cell phone-like icons that you can design yourself and integrate into your blog or profile on various social networks. Calls with other Touchring users are free, but you can also make phone calls to landlines and mobile phones (rates). Touchring launched yesterday.

UniQube (DemoPit company)
Seoul-based Solspectrum showcased UniQube in the DemoPit, an in-stream ad placement solution that’s supposed to help video portals monetize their content. The aim is to enhance brand awareness and customer engagement by integrating interactive ads into video clips or movies at the right moment in a non-intrusive way.

When an actor eats a pizza in a certain scene of a movie, for example, an overlay pizza ad could be displayed. Viewers choosing to click on it could then sign up for a competition or get discount coupons directly within the video without navigating away to another page. Snippets containing the interactive ads can be cut out and sent to friends via Twitter, Facebook and other media. UniQube users can track the distribution paths and effectiveness of their video ads in real-time. The solution is built upon Silverlight and still in development.

These are the two services from Japan that were in the TechCrunch 50 DemoPit:

LIFEmee
LIFEmee is a comprehensive life management service that allows you to store and share the significant aspects and events of your life online (from “the cradle to the crave”). Keep a diary, list up and control personal assets, upload a Last Will and Testament, lay out future plans and compare certain elements of your life, i.e. your annual income, with LIFEmee users around the world.

LIFEmee launched at TechCrunch50 (a Japanese version follows soon). Read more about this service in my previous post.

Spysee
The Japanese version of this people search engine went online last year and instantly gained impressive traction. Much like Spock, Spysee is focused on collecting information on individuals and shedding light on their relation with other people. Type in “Michael Arrington”, for example, and you’ll get a mini bio, a diagram displaying people (relatively) close to him, pictures (i.e. this one), relevant news, keywords, blog posts and video clips. Spysee went live Monday (in beta).