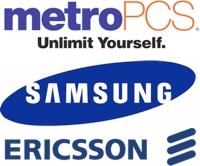 The fact that they’re only the 5th largest carrier in the United States hasn’t kept MetroPCS from dreaming big. Far from it – they’re gunning for the big boys today by announcing their vendors for the eventual big switch to LTE. From the looks of it, they’ve got a pretty solid team lined up: Ericsson will be handling the new network infrastructure, and Samsung has been tapped to provide Metro with their first LTE handset.

What has piqued everyone’s interest though, is their commitment to getting a spanking new dual-mode smartphone by the end of 2010. Whether or not this is the LTE launch handset Metro and Samsung alluded to is unknown (we’d guess no), but if the Samsung isn’t looking to claim that spot for their own, then ZTE seems poised to snap it up for themselves.