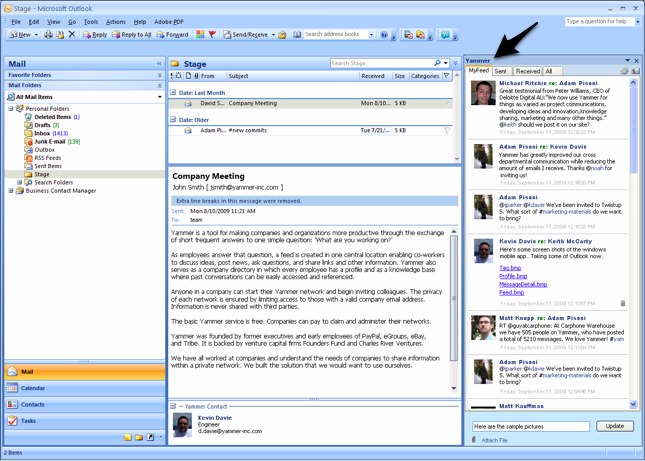 At the start of this year’s TechCrunch50 conference, last year’s TechCrunch50 winner, Yammer, is making a significant announcement about a partnership with Microsoft. Yammer, a micro-messaging tool for enterprises (TechCrunch uses it), is releasing a plug-in for Microsoft Outlook and an app for Windows Mobile phones. Yammer is also joining Microsoft BizSpark, a program that encourages startups to build on their software.

Yammer, which recently launched a “likes” feature, threaded conversations and a new push-enabled iPhone app, is rolling out “Yammer For Outlook,” a Microsoft Office Outlook 2007 plug-in that afford users much of the same functionality as Yammer desktop app. From a secure, separate pane within the Office client, Yammer users can post status updates, view feeds, reply to messages, upload attachments, send messages to Yammer groups, and invite colleagues.

Yammer’s CEO and founder, David Sacks, told me that Yammer is even integrated into Outlook’s email system, allowing users to address an email to their Yammer network using the drop-down menu. The user can choose either “CC Yammer”, which posts a regular status update by email to their Yammer network, or “CC Group”, which posts a message to a Yammer group, with the members optionally receiving it by email.

Yammer’s Windows Mobile app is similar to its Blackberry app, but is has a sleeker interface. You can view feeds, post updates and replies, look up colleagues, and place calls to colleagues from your Yammer network.

It’s not surprising that Yammer is now integrating with big-time enterprise apps like Outlook. The company has grown incredibly fast in a year, with employees at more than 40,000 companies worldwide using Yammer. Not to mention, Yammer’s product is solid and continues to improve. A few months ago, Yammer released a new, sleeker version of its desktop app (built on Adobe Air). And Microsoft definitely stands to benefit from helping Yammer build innovative applications on top of productivity software or products. Sacks said that Yammer is currently developing a plug-in for Internet Explorer, similar to the plug-in the startup created for Firefox. 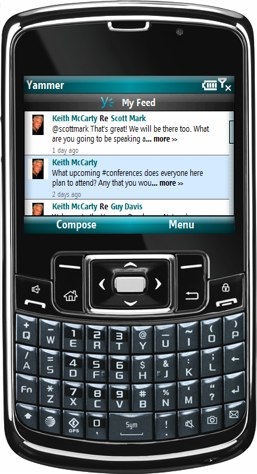