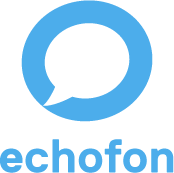 One of the first really great Twitter iPhone apps was TwitterFon, created by Naan Studio. The app saw success, as did its sister application, TwitterFox, a plug-in for Firefox. Both have been downloaded over a million times, and both apparently have over 200,000 daily active users. But today, both are changing their name, to Echofon.

The reasoning behind the change is a little odd. Naan Studios apparently wanted to unify the names of the products, but why not simply change TwitterFox to TwitterFon? The company says it got feedback and went with the “Echo” name, but both apps still are based around Twitter, so unless they’re planning to move off of (or go beyond) that platform, it just seems like it will confuse users to remove the “Twitter” part of the name.

But a nice part of this change is behind the scenes, this new different Echofon apps will talk to one another. From the company’s blog post:

As Echofon, these applications will talk to one another, unread tweets stay in sync between the applications. Imagine using Echofon while browsing the Web with Firefox, you read some tweets before running off to lunch. At lunch you are waiting for your food and check Echofon on your iPhone, because the apps sync with one another, you will be shown the tweet where you left off at home.

Echofon now supports iPhone Push Notifications for both mentions and direct messages on Twitter. Unfortunately, this feature will only be on Echofon Pro (the paid version of the app), they say they are working on bringing Push support to the free app too.

All that sounds great, it’s just too bad they had to switch to such an odd name.