So we’ve had our fun with Facebook over the years (Why We’re Suing Facebook For $25 Million In Statutory Damages, Republican PR Director Calls Facebook’s Randi Zuckerberg “totally full of sh*t”, Randi Threatens a Bar Bouncer). But in general these things are supposed to flow one way – we mess with them, they take it gracefully.

Today that changed. They punk’d us, and we fell for it. Hard.

Earlier today TechCrunch writer Jason Kincaid noticed something new on Facebook. When viewing any photo, it showed a “Fax This Photo” link on the bottom right of the screen. Ridiculous? Yes. But everyone in the TechCrunch network saw it. He fired off an email to Facebook at 5:05 pm. When they didn’t respond, he posted at 5:29: Facebook Now Lets You Fax Your Photos. I Have No Idea Why Anyone Would Want To Do This.

Things went downhill from there.

At 5:47 Facebook PR emailed and said “We already faxed you a statement on this??? Didn’t you get it?”

Then they emailed again at 5:51, saying:

We’ve been testing this product since 1992, and we are thinking that we will be launching this “innovative” feature at TechCrunch 50.

What do you think???

Then we asked a bunch of people outside of our network. Not a single other person said they saw the fax-a-photo feature.

Jason then called Facebook PR. Jaime Schopflin took the call and, apparently, couldn’t stop laughing for five minutes. Between laughs while catching her breath she mentioned something about this being a joke, that nobody but us could see it, and that they were placing bets around the office on how long before we noticed it and posted. And something else about teaching us to contact them before posting.

So, bottom line, don’t expect to see this feature actually launch. Unless you come to work for TechCrunch, I guess. We still see it.

Oh, by the way, the feature works. Here’s what it looks like: 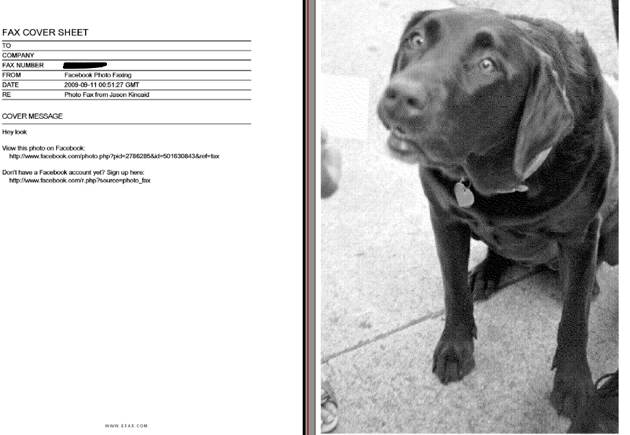