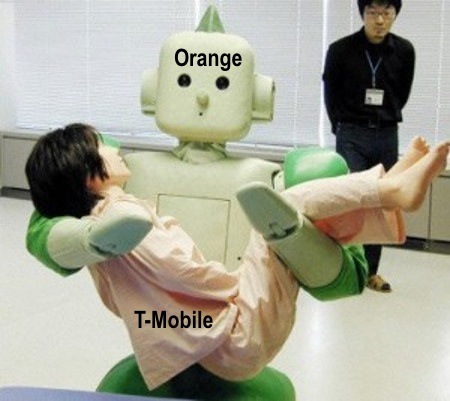 Rumor has it that T-Mobile UK and Orange UK will merge, creating a 28.4 million customer uber-carrier. The next largest carrier will be Telefonica’s O2, the former heavyweight.

The deal will be signed by November and the merged company will share networks and CRM services in the UK. This does not directly effect T-Mobile’s German parent company except in that it will lose its subsidiary in the UK.

Orange employs 12,500 people in the UK, while T-Mobile has UK workforce of 6,500.
A spokeswoman confirmed there would be “efficiencies” that could be made across both businesses – but said it was too early to give details of any impact on staff.
Integrating the business will cost between £600m and £800m, the firms said. This bill would include decommissioning mobile phone masts, cutting back the network of stores and streamlining other operations. Over time, savings should reach about £3.5bn, they added.

T-Mobile has traditionally been the runt in the UK and could use the boost that Orange, with 22 percent of the market, could give it. O2 also carried the iPhone in the UK.