The report mentions that the company has recently acquired the domain name vk.com for an undisclosed amount and plans to use it to brand and market Vkontakte.ru in 12 unnamed languages, starting October this year.

Notably, Vkontakte.ru is backed by Digital Sky Technologies (DST), the same investor who recently took a 1.96 percent stake in Facebook for $200 million – giving the company a $10 billion valuation – and soon after offered to purchase up to $100 million of common stock from current and former Facebook employees. Now the other high-profile portfolio company of the Moscow-based investment firm, Vkontakte.ru, is going head to head with the Palo Alto-based social networking giant in multiple languages.

Of course, it’s not that extraordinary for investors to hedge some of their bets on multiple companies operating on the same market, but it reminded me of something that was said during the video interview Michael did with Mark Zuckerberg and DST founder and CEO Yuri Milner after the $200 million dollar investment. When asked if he had an active account on Facebook, Milner responded that he spends more time on Russian social networks (in fact, Russians are avid social networkers compared to the rest of the world) but sees no reason why people wouldn’t just use two social networks synchronously more in the future. I’m sure he said that knowing that Vkontakte.ru would soon be expanding internationally, and I daresay there was some wishful thinking involved there too.

Vkontakte.ru claims to have attracted over 42 million registered users and comScore pegs the number of unique visitors to exceed 14 million per month. When we last modeled the value of social networking sites around the world, Vkontakte.ru came in 17th at a hypothetical $234 million. The company was already competing with Facebook in Russia, Ukraine, Poland and other Eastern European markets, but will be expanding to support more languages and countries starting next October.

(Thanks to Andrei Taraschuk for the tip) 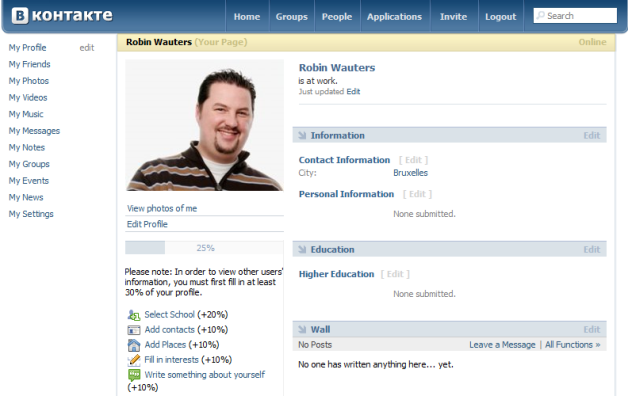