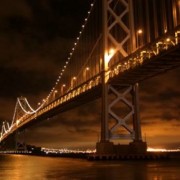 Residents of San Francisco are a bit put off by the temporary closure of the Bay Bridge this holiday weekend. For the next 2+ days, the short bridge commute between the city and the East bay is closed, forcing people to take 30 mile detours through Marin County to get to Oakland, Berkeley and beyond.

This is a perfect opportunity to test the map products on the major Internet portals. Who noted the temporary closure and helped users figure out the next best route?

Google Maps notes the closure, telling users “The Bay Bridge is closed from September 4 to September 8. Try dragging your route to a different path.”

Yahoo also seems to know about the closure, but doesn’t mention it to users. Instead, it routes you 35 miles through Marin county and over two other bridges to get to your destination. This is useful, but without pointing out that the Bay Bridge is closed, most people will likely think it’s a glitch and simply try the easier route (and be disappointed).

Microsoft Bing fails this test completely. Oblivious to the current road conditions, it blithely tells users to use the Bay Bridge to zip on over to Oakland.

Thanks to Noah Veltman for the tip, and the stunning image of the Bay Bridge above was taken by Thomas Hawk.