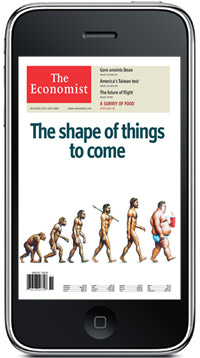 The Economist, the famous British weekly, has a new way to order hard copies: your phone. Yup, starting this week New Yorkers can use the weekly text messages that the Economist sends to order the dead trees version of the newspaper, then have it sent to their door by 6 a.m. The future!

And while the trial period is only available to New Yorkers, the Economist says that it plans to roll out the service across the U.S. as the river of time flows.

Keep in mind that you’re not really saving any money here; it’s just convenient. The Economist usually costs $6.99 at the newsstands, the same price you’ll be paying if you order via your phone.