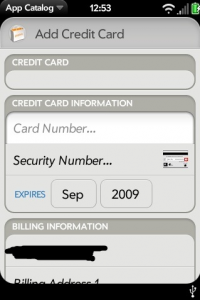 When PreCentral user go4craig went to go wipe his Pre with Palm’s end-all-be-all restoration application, he got a little surprise: v1.2 of the Pre firmware, which hasn’t been released yet. Whoops! Thats why you keep this type of stuff on completely separate servers with safety checks in place.

Tucked away inside the firmware is a handful of new features, albeit nothing earth shattering:

Don’t get too excited, though – at least, don’t jump the gun. Palm has since fixed the unintentional distribution method. While the firmware package has leaked to the internet, it’s a dangerous game. The first person who installed the firmware has since wound up with a bricked device, after the Pre tried to install v1.1 over v1.2.