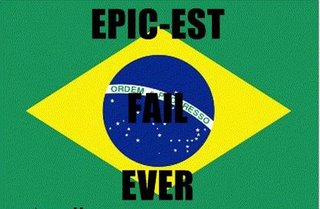 Right about now I should be leaving for the airport. In some 24 hours I’d be landing in Sao Paulo, picked up by my driver for the next two weeks and embarking on a jam-packed agenda, meeting with scores of South American startups and entrepreneurs.

This was to be the latest in my series of travels for my book-in-progress about entrepreneurship in emerging markets. Brazil was the one place that no one in the Valley was pushing me to visit. In fact, it was the one place my husband had asked me not to visit, having heard many reports of kidnapping and violence. But I was resolutely convinced there was a world of exciting companies and stories and had been looking forward to the trip for months. In fact, I’d spent about four months studying Portuguese and planning the trip.

I’m not on getting on that plane today though. Entrepreneurs who’d hoped to be written up on TechCrunch: Blame your government.

American citizens have to have visas to get into Brazil, and my visa was “guaranteed” to get to me by last Friday, the day before my original flight was supposed to leave. That didn’t happen and I was frustrated, but travel in emerging markets is never easy. So I agreed to push the trip back a week and absorb nearly $1,000 in extra costs associated with that, not to mention huge disruption to my schedule. (Bear in mind, this isn’t TechCrunch money. I am self-funding research for this book and have to closely watch every dime.) All I asked was when I would absolutely get the visa by so I wouldn’t have to reschedule things again. I was told yesterday, September 2. Guess what? No visa.

I’m now told that it is definitely getting here Friday. Unfortunately, I have no reason to actually believe that’s true at this point. I can’t push my schedule back any more and comply with existing trips in September, October and November and frankly, having now spent thousands of dollars on a trip that’s not happening, I wasn’t interested in throwing more good money after bad. As a result, my trip to Brazil is canceled. I have paid the fees to switch the plane ticket to one to China in October.

I paid an expediting service hundreds of dollars to ensure I’d be getting this visa, and clearly they’ve been getting an earful from me over the last week. If not for a phone call from the owner this morning finally agreeing to waive the fees I paid them, this post would largely be skewering them. But she assures me no one is getting into Brazil and her week has been even worse than mine. Apparently, the Brazilian government decided to switch to a new computer system for all of its consulate offices and only sent two computers to each office, and not the adequate software to process everything. So everyone has been in a holding pattern. Some consulates aren’t promising any visas before 25 days; others won’t even take an appointment with prospective travelers unless they show documents showing travel in the next 15 days. In fact my visa is the first one the processing firm will get back—that is, if they actually do get it today as promised. They’ve not only been screamed at by me, but loads of business travelers—and even a coach for a national soccer team who can’t get in the country.

It’s particularly ironic given that the Brazilian government has recently hired the PR firm Fleishman Hillard to go around talking up its commitment to IT and entrepreneurship. You want foreign investment and attention, Brazil? Here’s an idea: LET PEOPLE ENTER THE DAMN COUNTRY. You want to show your IT prowess? How about outfitting your consulates with computer systems that work? Or maybe rolling it out slowly so other offices could handle the overflow. Or training people on it first.

The country should be embarrassed, and its businesses should be furious. I’m going to aim to try this whole Brazil thing again in December or January. It’s not the entrepreneurs’ or our readers’ fault this happened, and I still believe there are great stories in Brazil that I want to report. But when you’re harder to get into than China, it doesn’t bode well for foreign investment, Brazil.