Name any hip hop song played on the radio in the past year or so. Did any of the lyrics sound sort of warbly – as if sung by a robot? Chances are, the answer is “Yes.” That’s called Auto-Tune. And now there’s an app for that.

Smule, the masterminds behind the smash-hit apps Ocarina and Leaf Trombone, have teamed up with hip hop artist T-Pain (known for calling on Auto-Tune for just about every word he sings) and the makers of Auto-Tune, Antares, to bring the pitch-tweaking tool to the iPhone as I Am T-Pain. Oh – and it works in real time (and we’ve got hands-on video.)

In its original form, Auto-Tune is an audio processing application for Windows and OS X. By way of what can only be explained as audio engineering voodoo, Auto-tune allows artists to pitch correct their vocals to perfection. Some, like T-Pain (and, as of recently, Kanye West and the Black Eyed Peas,) use Auto-Tune to add that signature drunken-robot sound that is oh-so-trendy as of late. Generally, a copy of Auto-Tune will cost around $400 bucks. Smule’s application will set you back $2.99. 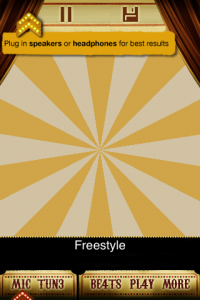 What Smule has done here is technically incredible – and it’s a friggin’ killer product idea, to boot. You sing into the iPhone microphone, and it pipes your voice back through the iPhone earpiece or (preferably) speakers/headphones, complete with that Auto-tune sound. You can pick which scale you want your voice “Auto-tuned” to, saving your favorite settings as presets for later use. All of the technology is officially licensed and based off of the original.

While you’re free to plug-in and robo-sing A capella, I Am T-Pain comes with instrumental versions of 5 T-Pain tracks and 3 generic beats. The words for the T-pain tracks are displayed on screen with perfectly synced highlighting, allowing for impromptu Karaoke sessions. Making use of the premium content system added in iPhone OS 3.0, they’ve also tossed a handful of premium tracks into the mix for 99c a pop. All performances can be recorded for later playback, sent via email, or pushed to an accompanying application on Facebook or Myspace. If you’ve got friends with iPhones, you should fully expect to get a pitch-tweaked message in your inbox before too long. Don’t be surprised if they call you “Shawtay”. 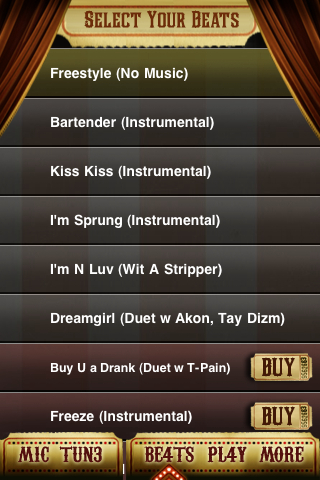 We’ve been playing with this application for around 4 1/2 hours now, nearly non-stop. We’ve only found one fault so far: you can’t sing along with music stored on your iPhone. This is presumably due to licensing issues involved with recording/sending tracks, or technical limitations of the iPhone. If you want to cyborg-croon to your self-provided beats, you’ll need to play them on a stereo and jack the iPhone into the microphone port.

You can grab it in the App Store here.

Check out this exclusive clip of R&B singer Akon playing with the app for the first time: