There are plenty of Web-based task management tools that let you track the progress of your work projects and collaborate with co-workers. Producteev founder Ilan Abehassera wants to go one better and help you “complete your task” by making it easy to ask your contacts and followers on Twitter for assistance.

Producteev shows you a dashboard of different tasks you’ve set up, each in its own widget box which you can drag around and rearrange. For its commercial launch today, Producteev is introducing some new features. One is the ability to syndicate any task to Twitter or Facebook.

So if you need a Web designer or sales person for a project, for example, you can create a task on Producteev and share that not only with your co-workers, but also publish it on Twitter. A link brings your Twitter followers back to a public page on Producteev for that specific task/message, where they can reply. All outside replies are brought into the Producteev activity stream for everyone in your work group to see. This is good, but it doesn’t go far enough, as you can’t reply via Producteev and have that reply appear on Twitter.

Another new feature makes Producteev like a Friendfeed of productivity apps. It lets you bring in other streams of data from outside Producteev, including Slideshare, Scribd, Zoho, Twitter, and soon Google Docs, Google Reader, and Yammer (yes, it competes with Yammer on the communication stream, but Producteev is more about task management). So you can automatically see when someone on your team adds a new presentation to Slideshare, edits a doc, or shares an article.

There is also now a timeline/calendar view, which comes in handy since every task can be assigned a due date. (The other views are a dashboard grid that is similar to Netvibes or iGoogle, and a straight, chronological activity stream). Workers can now generate reports based on their tasks in progress and completed, which they can show to employers to prove they’ve been working (oDesk anyone?). Soon Producteev will add graphs as well for productivity tracking at a glance.

Other upcoming features on the product roadmap include integration with Meebo Community IM for chat functionality, the ability to export deadlines and reminders to iCal, Google Calendar, and Outllook, an OpenSocial application on Xing, and a JoliCloud app.

Producteev is gradually becoming a fully-featured online productivity and collaboration tool. I would compare it to WizeHive, another great online task management tool with a slightly different set of features. Producteev is seed funded, and recently raised $180,000 in angel money from a group including Fotolia president Oleg Tscheltzoff.

The service is free for up to 3 users, and then starts at $19/ month up to 10 users. The top Gold membership is $99/month for 100 users. Different pricing applies to university students, another target market. We’re giving away 10 Gold subscriptions for one year to whoever adds the best comments below about their greatest productivity challenge or suggestions for new features. Abehassera will pick the best 10 and respond in comments. 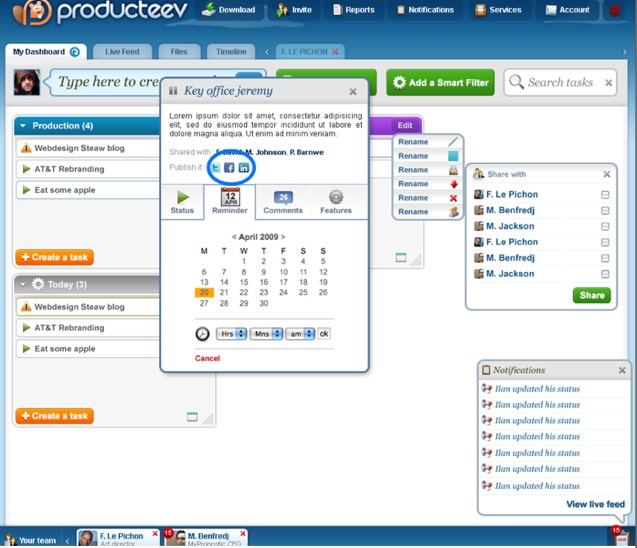 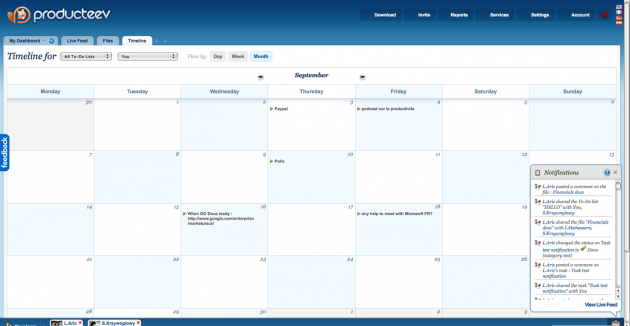