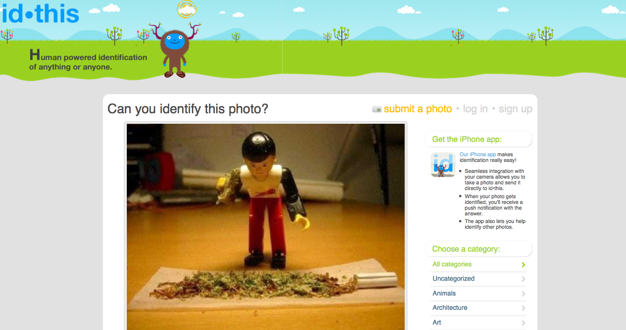 Sometimes you come across something and don’t know exactly what it is. What if you could snap a photo on your iPhone, upload it to a site where people can submit answers and vote on the best ones, and send out a link to everyone you know on Twitter to get them to weigh in? That basically describes idthis, a simple site developed by Billy Chasen, who previously created chartbeat (which I covered here) and firef.ly for betaworks.

With idthis, which is both a Website and an iPhone app (iTunes link), the concept is pretty simple, but I can see it going in different directions. One is a simple utility. You see an old BMW convertible on the street and want to know what year it is. Send a photo to idthis. It could also be a way to play visual games. Take a closeup of an object or make it slightly blurry and see who can guess what it is first. (Obscene photos will be taken down and can be flagged by the community).

The instructions on the site state:

Just snap a photo of something you’d like identified (like a breed of dog, a type of car, that weird gelatinous blob sitting on your plate, or even that celebrity sitting next to you that you can’t remember their name, etc…) and then send it to be identified.

Anyone can submit an answer. Once an answer gets five votes, the picture becomes officially identified (you can change the number of votes required to identify a picture when you submit it). Here’s one I put up. See if you guys can guess what it is. 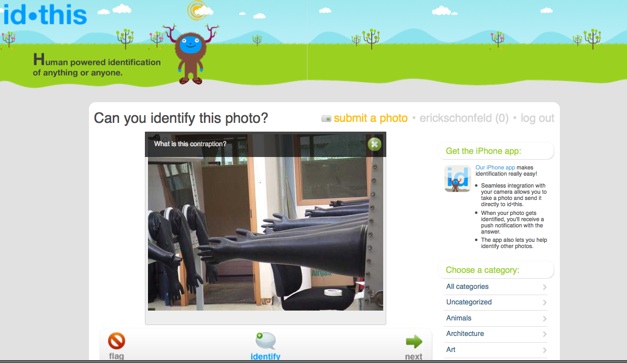