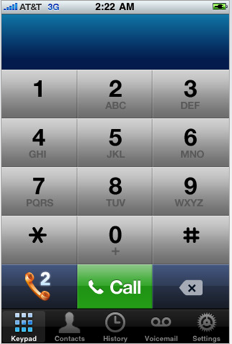 The Apple/Google Voice fiasco just got more interesting. Toktumi, a startup that lets small businesses build office-caliber phone systems with their mobile phones and computers, just had its application Line2 approved by Apple — nearly three months after it was originally submitted. The powerful service allows business employees to assign two phone numbers to their iPhone: one that they can give to family and friends, and another that can be given to business contacts, with features that allow for call filtering and a professional-grade voicemail system. But it’s also notable for its many similarities to Google Voice, an application that Apple has kept out of the App Store for months now.

The story so far: late last July, Apple abruptly pulled all third party Google Voice applications from the App Store, explaining that they somehow were duplicating the iPhone’s native functionality. Later that day, we broke the news that Google’s official Google Voice client had been barred from the App Store, sparking a media storm and a FCC inquiry into Apple’s rationale for the ban.

Line2, an iPhone client that lets you easily tap into the Toktumi service, got caught in the crossfire. From a technical standpoint the application is quite similar to Google Voice: both services allow you to hand out a ‘virtual number’ to contacts. When they call, the service can either relay the call to your ‘real’ number (the AT&T number assigned to your iPhone), or it can send it to voicemail, depending on the way you’ve set up your call filters. You can also use both services to make cheap long distance calls. In fact, the Line2 app was built by developer Sean Kovacs — the same developer who built GV Mobile, one of the handful of third party Google Voice apps that Apple pulled.

But there are some key differences. For one, Toktumi doesn’t include support for SMS at all; Google Voice does. And Toktumi costs $14.95 a month, while Google Voice is free. Toktumi is also marketing its service to a very different audience: while Google Voice is trying to let you use a single phone number for everything, Toktumi wants to give small business employees who lack a dedicated work line the flexibility to use two phone numbers from the same mobile phone, and includes some features that Google Voice doesn’t. Here’s how we previously described it:

Line2 would allow users to use two different numbers with their iPhones — one which they could hand out for business calls, and the other for personal. This setup would allow employees to keep their personal numbers private, and also allows businesses to set up professional features on the business line, with features like an phone directory (”Press 1 for sales…”) and a single support number that calls the mobile phones of multiple employees.

Even with those differences, Toktumi CEO Peter Sisson says that many consumers do actually use the service as an alternative to Google Voice — if you just hand out your Toktumi number to everyone, you can use the service’s filtering options to manage your calls much as you would with Google’s service (he does note that Toktumi’s filtering is less flexible than Google’s, but it should be sufficient for most people).

Soon after the Google Voice story broke, Sisson grew concerned that his application’s similarities might keep it from being accepted to the App Store, so he attempted to reach out to Apple executive Phil Schiller. Schiller got back to him, saying that he would have an answer soon. Then the FCC launched its inquiry, and Apple went silent. Sisson says he’s been pestering Apple over the last month, and it looks like his persistence worked.

It’s great news to hear that Line2 has been accepted, and it may indicate that Apple is coming closer to accepting Google Voice — given Apple’s approval of Vonage this morning, it the App Store may even have some new policies in place regarding this kind of app (though details on the Vonage app are still sparse). Also worth noting: Line2 clearly “replaces” the phone’s Voicemail and keyboard in the same way Apple complained about in its FCC response about Google Voice (this claim has always been laughable). If Apple still won’t approve Google Voice after this, it will be clear, as if it wasn’t already, that it’s not worried about the user experience — it’s worried about Google.

If you’d like to try Toktumi out for yourself, visit Line2.com, and the first 200 US-based users to sign up using the promo code 743623718 will be able to access 3 months of unlimited US/Canada calling and cheap international calls, as well as Toktumi’s other features like a professional-grade voicemail system. You can download the iPhone app here.