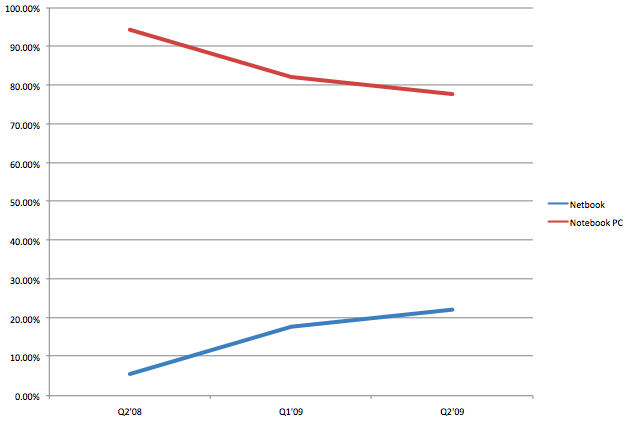 In the second quarter, netbooks accounted for 22.5 of all portable computer shipments worldwide, according to market forecaster DisplaySearch (which is part of the NPD Group). That is up from 5.6 percent a year ago, and 17.8 percent in the first quarter of 2009.

At this growth rate, netbooks will soon rival larger notebooks. Netbooks, or mini-notes as DisplaySearch calls them, outgrew larger notebook PCs by nearly 2 to 1. It grew 40 percent quarter over quarter, compared to 22 percent for larger notebooks. Of course, since netbooks are so much cheaper, the growth in revenues is not proportional.

Netbooks are taking the most share in Europe, where they had 32.9 percent share in the second quarter, followed by North America (26.6 percent), and China (18.8 percent). In North America, shipments are getting a boost because broadband providers are adding them as incentives for people who sign up for two-year plans. For instance, I’m getting a free HP netbook for signing up for Verizon FIOS. That’s going to be the kitchen/couch PC.