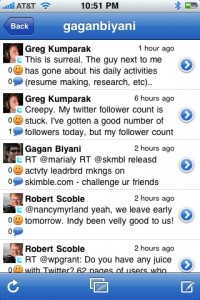 Are you addicted to FriendFeed? Can’t get enough of Robert Scoble‘s incessant posts? Want to keep up with them even when you’re on the go? Are you praying to the heavens that Facebook doesn’t screw up FriendFeed post-acquisition? Then Stir (iTunes link) might just be for you. Created by StructLab Stir is an iPhone app that allows you to get your fill of FriendFeed anytime, anywhere. You can use it in the bathroom at work (guilty), while watching a lame chick flick with your girlfriend (guilty) or if you’re on the couch and don’t want to walk the 10 feet to your desk (umm, yes, guilty).

Of course, it is hardly the first FriendFeed app for the iPhone, but it’s the first one I’ve looked at and it’s pretty damn good. Mind you, I only started using FriendFeed last week. Twitter [follow me] is still my micro-blogging platform of choice, but I quickly noticed that FriendFeed has some obvious benefits. And Stir takes advantage of all of them.

Stir is easy to set up. You simply open the App and type in your username and password and it brings up all of your information. That isn’t unique to any social networking iPhone app, but it’s a must-have. What makes Stir a great app, though, is that it utilizes FriendFeed’s functionality extremely well. FriendFeed, first and foremost, is an aggregator of your social media. It does this by bringing all of your self-generated social media content (Facebook, Flickr, YouTube, Twitter, blog) onto one site. You then share that content with anyone else who also uses FriendFeed, and see a “stream” of their social media and yours. Additionally, FriendFeed does a great job of allowing you to interact with that content – users can “Like” or comment on any post. Basically, a good FriendFeed iPhone app should let you: 1) easily view, manage and post to the stream and 2) interact with content on the stream. 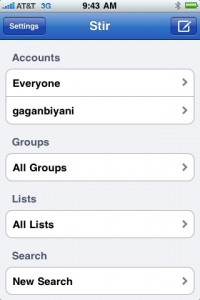 Stir does both beautifully. It automatically provides you with a way of viewing multiple different types of streams. You can either see your full stream (all of your friends), or you can separate your stream by social network (Facebook, Twitter, Flickr, etc.) so you only see posts of your FriendFeed subscriptions that come from that network. Furthermore, you can access additional streams that are separated by groups, lists or search terms. So, if you’re a part of the TechCrunch group on FriendFeed, you can see everything that’s coming from that feed with just a few taps on the screen. Similarly, if you’ve got a separate list for your Star Wars Trading Card Game friends, they show up on Stir as a separate feed. Useful if you want to cut out the noise and focus on a specific group or shared interest. 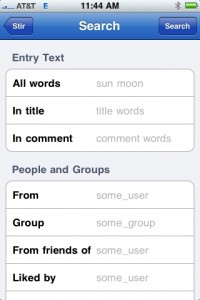 Stir also allows you to easily interact with FriendFeed content. If you really loved Sarah‘s latest article on how Mac Fanboys are starting to crawl back into their hole, feel free to “like” it or comment on it within the app.

However, Stir doesn’t do anything special: it isn’t the TweetDeck of FriendFeed clients. It doesn’t help you better organize your feeds or revolutionize the FriendFeed experience. But it doesn’t have to, because unlike Twitter, FriendFeed is useful right out-of-the-box (who really uses twitter.com anymore?). Instead, Stir simply allows you to access this great web app via your iPhone. It’s easy-to-use, got a clean interface and isn’t missing any obvious functionality.

Bottom line: it does everything FriendFeed does. On your iPhone. It costs $2.99, which is a bit pricey, but if it’s the only FriendFeed App you buy, $3 ain’t too shabby.

[Disclosure: Devin here. I know the app’s primary developer since we go to the same bar. He was working on this and I said it looked sweet and should be on the network. Other than suggesting he implement the Konami code somewhere in the app, that’s the extent of my involvement. He also asked to have it noted here that he’ll continue to adapt Stir to work with whatever FaceBook’s got up its sleeves.]

We’re out! The lucky (or quick on the draw, really) 8 will get an email in the next couple minutes.