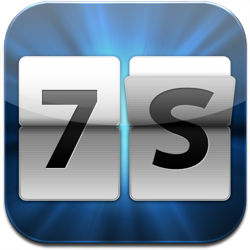 Over the last few months we’ve seen the rise of a new and highly controversial kind of website that focuses on “Entertainment Shopping” — online stores that offer customers goods with very steep discounts, but with some risk involved in the shopping process. Some have likened these to gambling or scams, while others consider them auctions. In any case, it’s only becoming more popular, and now there’s a startup called SevenSnap that’s bringing Entertainment Shopping to the iPhone.

The app isn’t out on the App Store yet, but the company recently released a video (embedded below) that shows it off. Here’s how it works: every 60 minutes, SevenSnap puts a new item up for grabs (the example in the video is a Macbook Pro). If you want to have a shot at purchasing the item, you need to purchase “time credits”, which run a dollar per minute. Once you’ve done that, you can jump into the sale room, where you’ll get to watch as the item’s price drops every second (depending on how many people are in the room, it can drop by as much as $100 per minute). At this point it’s a game of chicken — the longer you wait the lower the price goes, but if someone pulls the trigger and purchases it then the price jumps up to its starting amount for everyone else. Remember, you’re paying a dollar per minute in the room, so whenever it resets you lose out on a few bucks.

SevenSnap could be fun if you have cash to burn, but it’s not hard to see why people have issues with this kind of shopping site — If SevenSnap were to arbitrarily reset the prices of its items without actually selling them, it could effectively collect money for nothing. The startup may well turn out to be perfectly honest, but until the company has built up a reputation or there is some regulation involved, caveat emptor.

Other startups in this space have met with similar concerns regarding fraud, and are taking steps to make the process more consumer friendly. One of these is iBidCondo, which uses a somewhat similar model to auction off housing. We looked at the site July, when I (and a number of readers) pointed out some potential problems. In light of these concerns the site postponed an upcoming auction so that it can revamp its system to introduce more transparency.

The biggest name in this space is Swoopo, which uses the ‘falling prices’ model but has a much greater variety of products that are on sale simultaneously. The site recently introduced a new feature that negates some of the risk involved — even if you lose out on an auction, you can apply the money you’ve used to bid on it towards purchasing the product at its normal retail price. If you were only going to buy the product because of its incredibly low advertised price then you’re out of luck, but it’s definitely better than the old system where you would always walk away empty handed when you lost an auction.