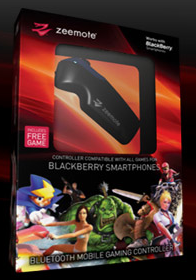 The Zeemote JS1 controller has always intrigued us. Mobile handsets are getting more and more powerful, and the games are bordering on beautiful – but the controls are still terrible. Attempting to control a game with a virtual, onscreen D-pad is like threading a needle with your feet. That’s where the JS1 comes in. As a standalone Bluetooth game controller, it theoretically brings mobile gaming a bit closer to the gaming we’re used to on other platforms. Alas, it’s always had one major fault: you couldn’t buy the damn thing.

Well, that’s a lie. You could buy it – but you’d need to buy a Sony Ericsson or Nokia phone with it. Since its launch in February of 2008, Zeemote would only sold the JS1 in bundled kits. When we asked Zeemote about this, they implied that they just weren’t setup to do that level of distribution in-house.

Well, it looks like they’ve found someone who is. The Zeemote JS1 for BlackBerry is now available for standalone purchase directly through RIM’s own accessory shop. Zeemote launched an SDK for BlackBerry back in October of last year, allowing developers to prep their games for compatibility. Gameloft, amongst others, took them up on their offer, making all 200+ of their titles Zeemote compatible. $39.99 gets you the controller, plus one free gameloft game.

So what do you think – now that it’s available, would you be willing to tote a standalone controller?