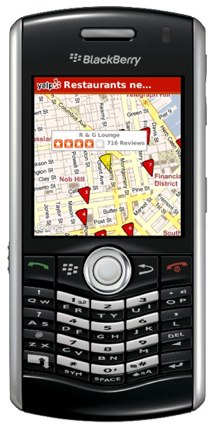 We’ve written about the many iterations of Yelp’s iPhone app and today, Yelp has broadened its mobile horizons by launching the much awaited Blackberry Yelp app. You can download it here.

Similar to the iPhone app, the Blackberry app uses location-aware technology to determine your current location and will then let you search for nearby businesses, read reviews and access a moveable map, which is powered by Bing rather than Google. This is interesting considering the maps feature on the iPhone app is powered by Google Maps. Yelp says that Bing was used because the search engine provided map tile access, which was essential for movable maps on the app.

The app lets you zoom in and out on a location and then change your search based on that geographic area. Yelp says the Blackberry app works in the US, Canada and the UK (which is everywhere Yelp is available).

As we’ve said in the past, Yelp keeps rolling out new iPhone apps with powerful and noteworthy features. In April, they released Version 2 and added the ability for users to leave reviews on local businesses, giving people the ability to post reviews directly from their iPhone.

Version 3, which we wrote about a few weeks ago, adds a few more compelling features, including a “Sales And Offers Near You” feature which lets users find deals that are physically close to them. You can sort by distance (in blocks), price, whether the business is open right then, or by neighborhood. Businesses can add special offers for free on their business page.

Yelp has made a strong move in the mobile space, and this latest app is representative of its ambitions to broaden its horizons. Perhaps an Android app is next?