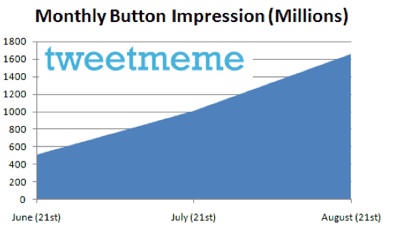 If you look at the top right hand corner of any blog post on TechCrunch, you will see both the number of comments on it and the number of times it’s been retweeted (linked to and passed around on Twitter). Usually the retweet number is bigger than the number of comments because it is much easier to do. It counts as a vote for that post inasmuch as a passed link can be construed as a reader recommendation. Everyone who retweets a link is in effect recommending it to all of their followers, and it can help to drive traffic back to the original post. At least that is the theory.

But how many retweet buttons are actually out there and how many people click on them? When it comes to the spread of the buttons themselves, TweetMeme offered some stats today showing that its retweet buttons are now getting 1.6 billion impressions a month. That number has quadrupled in the past two months alone. New retweet market entrants have a lot of catching up to do. And Just wait until retweet buttons start appearing on individual comments as well.

What that means, however, is just that the buttons are appearing on blog posts and articles which collectively are viewed 1.6 billion times a month, not that they are clicked on that many times. I asked Tweetmeme founder Nick Halstead how many actual retweets do those buttons produce. He doesn’t have exact numbers for that yet, but his best guesstimate is 200,000 a day, or 6 million a month. That translates into a paltry 0.375 percent click-through rate.

There are a few caveats about this number. It doesn’t count people who click on the retweet button who are not members of Twitter. It only counts the overlap. So the actual number of clicks is no doubt higher. In fact, on the retweet button in RSS feeds and for people who are already logged into Twitter (which TweetMeme can measure), the click-through rate is 1 percent. But the vast majority of impressions are for people who are not logged in. So the real click-through rate is somewhere in between 0.375 percent and 1 percent.

The other thing to remember is that it can take fewer retweets to make an article go viral than, say, Diggs. Depending on how many followers each retweeter has and how many actually click on the link, a few retweets can be all it takes to drive a ton of people to that blog post. Twitter certainly drives a lot of traffic to TechCrunch, but we don’t really know how much of that is due to retweets.

TweetMeme is working on giving Websites who use its retweet button better insight into downstream traffic. Halstead also revealed that it is going to release an analytics service which measures traffic coming from retweets. He’d better hurry up with that before Twitter itself beats him to the punch. 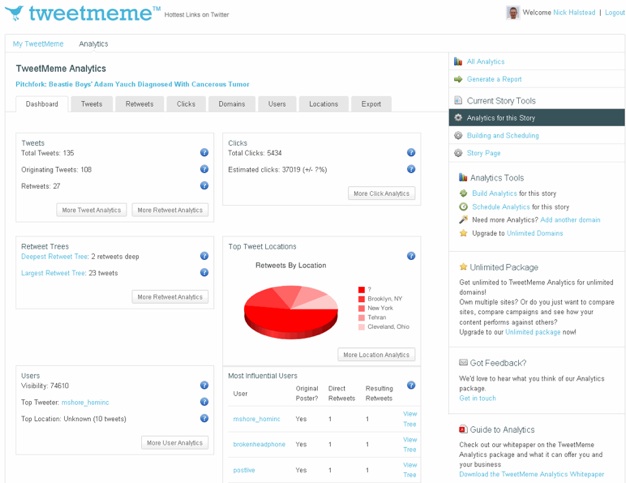