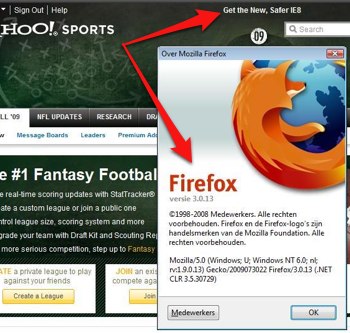 Does Yahoo consider IE8 safer than Firefox? Not if you visit the German Yahoo, which promotes Firefox 3.5 (a tragedy of a browser) by saying “Schneller und smarter: Der neue Firefox 3.5” (translation: “Faster and smarter: The new Firefox 3.5”).

A year ago, when Yahoo and Microsoft were at war, Yahoo promoted Firefox to IE users.

So what browser is safest and fastest?

As Robin said, “Apparently, Yahoo recommends browsers based on what their latest business alliances are.”

My guess is the German staff haven’t received the memo yet. It’s IE, not Firefox, that’s the safest browser this week, guys. Get with the program.

As an aside, one Yahoo employee complained this morning that all Yahoo is doing is recommending IE users upgrade to IE8, and Firefox users upgrade to Firefox 3.5, which isn’t the case. After calling Robin an idiot and accusing him of not fact checking, he later apologized. We accept.

Update: Poor Yahoo Mexico doesn’t know what to do, so they promote both browsers in the header.