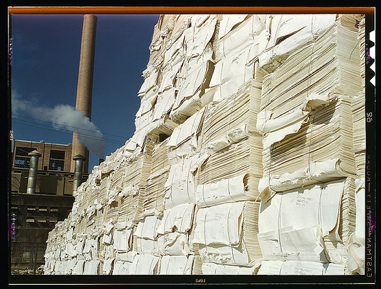 Here we go again. The newspaper industry is blaming online news aggregators for its dwindling profits and inability to adapt to a world of links and truly-free flowing information. (They like it when information flows freely into their pages, but not so much when it flows out).

On Thursday, paidContent ran an essay by media consultant Arnon Mishkin called “The Fallacy Of The Link Economy” which was misguided on so many levels. Mishkin’s main argument is that:

The vast majority of the value gets captured by aggregators linking and scraping rather than by the news organizations that get linked and scraped.

It is not really clear whom he is calling an aggregator—actual news aggregators like Yahoo News, Google News, Digg, Techmeme and the Huffington Post, or anyone who links to a news story. After all, he equates the entire web to the blogosphere, which says more about his parochial industry view than about the web. In his mind, the web is the enemy and links are bad.

What really seems to concern him, however, are news aggregation sites. They threaten newspapers because they are emerging as the new front page which people skim every morning for headlines instead of going to any single newspaper site. Mishkin argues:

Historically, the value of those casual browsers was captured by the newspaper because the readers would have to buy a copy. Now all the value gets captured by the aggregator that scrapes the copy and creates a front page that a set of readers choose to scan.

Set aside for a second that ads on news aggregation sites are usually worth a lot less than ads on original content sites and thus they are not capturing the same value. More to the point, when I first read this my immediate response was that the value of news sites does not come from getting people to skim headlines, but to actually click through and read the actual stories. The newspaper industry wants to go back to the world before the Web, when each newspaper was a small media bundle packed with stories, 80 percent of which sucked. But it didn’t matter because you’d gladly pay a dollar to read the one or two stories that caught your eye on the front page, hoping there would be more inside.

Well, guess what? The media bundle is dead. News sites can no longer capture reader’s attention with 20 percent news, and 80 percent suck. Each story stands on its own in a world of atomized content where readers can come from anywhere on the Web, not just the front page. Now in addition to the front page, there are a million side doors. Reader lock-in is gone. The sooner newspapers get used to that concept, the sooner they can start to adapt and survive.

Which brings us back to the value of news aggregators. The newspaper industry is looking for someone to blame. Usually, it’s Google, but really anyone on the Web will do. Rather than blame the aggregators, news site should take advantage of them. On the Web, every side door can be a front page, whether it is Google News or search or Digg or Twitter or a feed reader or My Yahoo. I’ve said this before about Google, but it applies to any site that links to the news:

Google does not control the news, it exposes it. . . . It is incumbent upon each of us to attract an audience by having something original or interesting to say.

And if a news site or a blog can say enough interesting things enough times that news aggregators (or other sites) keep linking to them, then they can build up their brand and reader loyalty. Maybe readers will click on those links if they see it is coming from a trusted source, and then maybe some of those will start coming to the news site itself on a regular basis. But that loyalty must be earned every day, story by story, post by post. The more front pages (or side pages) which point to a news site’s stories, the more chances it has to gain that loyalty.

But the days of the media bundle when readers got all of the day’s news from one site are long gone. So too are gone the cushy days when newspapers could count “casual browsers” as real readers and sell them to advertisers. Newspapers had better get used to a world where links exist and can whisk readers away as quickly as they bring them. Those who don’t will learn that trying to recreate the past is a sure a path to an early grave.