It looks like Facebook has tonight turned on a feature called “Facebook Lite” for some users to test out. We’re getting bombarded by tips about it, and some of us are seeing it as well. Unfortunately, it appears that it may not be fully ready for prime time yet, but we have more information and what looks to be a screenshot below, so keep reading.

[Update: See Facebook’s response at the bottom, the test was mistakenly rolled out to more users than intended tonight.]

So what is it? Well, it looks to be exactly what it says it is, a lighter version of Facebook. The beta tester message reads:

We are building a faster, simpler version of Facebook that we call Facebook Lite. It’s not finished yet and we have plenty of kinks to work out, but we would love to get your feedback on what we have built so far.

The URL for the feature is http://lite.facebook.com. So far, users are reporting not seeing much different about the site, if anything.

You’ll recall that MySpace launched a “lite” version for its profiles in April.

Update: Okay, while it seems that most of the users who are getting this message now are not seeing much different, earlier this week, it looks like a very select few may have gotten a sneak peak at Facebook Lite. According to their tweets on it, it appears to be a more Twitter-like. One user notes that it, “looks like a simplified version of twitter with comments enabled. On 2nd thought, it looks like simplified FriendFeed.”

That is of course very interesting since Facebook just bought FriendFeed for around $50 million yesterday.

Update 2: We just found a screenshot of what this apparently looks like. Again, this was taken a few days ago. 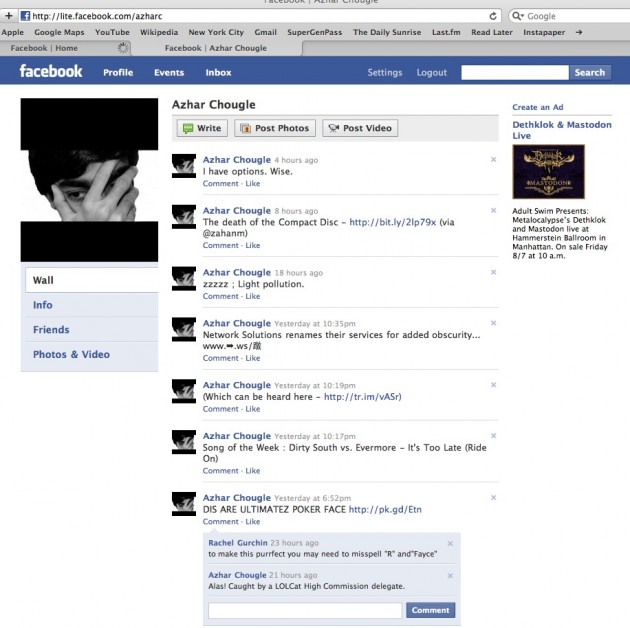 Update 3: FriendFeed co-founder Paul Buchheit shared our story on FriendFeed, so naturally I asked if he knew about this beforehand. “Someone mentioned it earlier today. It sounds very promising,” he says.

We are currently testing a simplified alternative to Facebook.com that loads a specific set of features quickly and efficiently. Similar to the Facebook experience you get on your mobile phones, Facebook “Lite” is a fast-loading, simplified version of Facebook that enables people to make comments, accept Friend requests, write on people’s Walls, and look at photos and Status updates. We are currently testing Facebook Lite in countries where we are seeing lots of new users coming to Facebook for the first time and are looking to start off with a more simple experience.

This evening, the test was temporarily exposed to a larger set of users by mistake. We have not opened up access to lite.facebook.com to all users at this time. People who are not part of the test and are trying to access “Lite” will be directed to Facebook.com as usual.

Whoops, looks like someone at Facebook jumped the gun on this new feature. Too bad, looks like most of us will have to wait awhile to try it out.

Update 5: And here’s what Facebook Lite is really all about.

Update 6: And here are some more pictures of Facebook Lite. 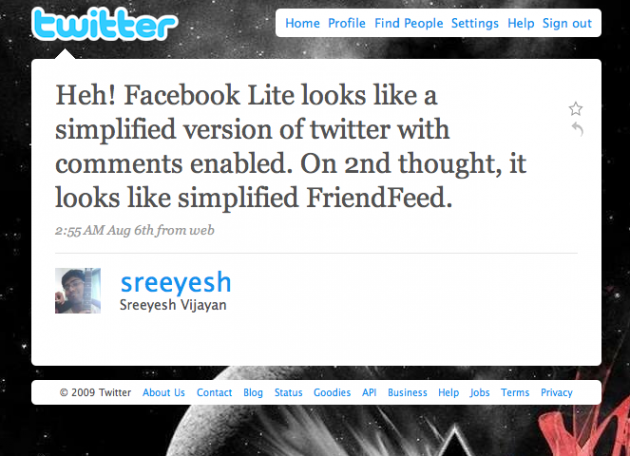 We are updating this.

[thanks to everyone who sent this in]