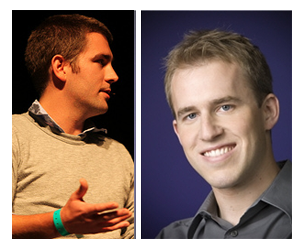 Details on the Facebook acquisition of Friendfeed story that we broke earlier today are still coming in. But we had a chance to talk with Friendfeed cofounder Bret Taylor (pictured right) and Facebook VP Products Chris Cox a few minutes ago to discuss the deal and the product integration plans going forward.

On How the Deal Happened

Cox and Taylor won’t talk deal terms or even if the deal was stock, cash or a mix (likely all stock or mostly stock). Friendfeed has raised just $5 million in an early 2008 financing, and is backed by Benchmark Capital.

Taylor said “this is an 11th hour deal,” (sounds like it was finalized last week and there was quite a party) but that the two companies have been talking for some time. “Things heated up in the last couple of weeks,” he said, after the two were on a panel together at the Real Time CrunchUp on July 10.

We’ve heard from one source that, like the 2007 Parakey acquisition, the deal is largely a talent acquisition by Facebook, and less about the Friendfeed product. Friendfeed has 12 employees, and all but one are engineers.

But Facebook is clearly excited about Friendfeed’s ability to innovate and launch new products. Taylor said “The basic idea is that Facebook doesn’t want to disrupt the product…they’ll take a lot of ideas that work well on Friendfeed and see how they apply to Facebook, and over time they’ll look at how to integrate the products.”

He also said that Friendfeed and Facebook agree on a few main philosophical points around openness. “Facebook’s focus on Facebook Connect and openness is also a central tenet of Friendfeed. Some of our ideas on Friendfeed can really accelerate Facebook’s product plans.”

Cox agreed, noting that Facebook is focused on being a platform and a service, and not just a destination site. “Friendfeed’s core values, portability and aggregation of content created everywhere, will happen at an accelerated pace at Facebook.”

Note that translations are rough, I took notes and I usually can’t read my own writing.

Friendfeed will move out of their Mountain View offices and join Facebook at their Palo Alto headquarters shortly, Taylor said.