It’s no secret that group collaboration services like WebEx can be a major pain, particularly when they require proprietary browser plugins (some of them don’t even support Macs at all). Team Apart, a new startup launching in private beta today, is joining the fray of startups looking to offer an easier solution. If you’d like to try the service out, you can grab one of 100 invites for TechCrunch readers here.

As with similar collaboration services, Team Apart revolves around voice and audio chat, along with document sharing and editing. Alongside the video chat, you can edit a notepad and free-form whiteboard (multiple people can edit the same thing at once, and it’s updated in real-time). You can also upload documents and photos, which will become visible to everyone else in the meeting in a matter of seconds. Entering a meeting involves simply clicking a link — there’s no plugin needed (it’s based on Flash) and the service is free.

Team Apart says that its service is meant for ‘many-to-many’ calls where everyone is particpating rather than a one-to-many call, where one person does most of the talking and everyone else listens. Unfortunately that ‘many’ part of the phrase still needs some work — you’re currently limited to only four simultaneous participants, though that number may increase once Team Apart leaves beta. My biggest concern about Team Apart, though, is that there doesn’t seem to be a whole lot differentiating it from the myriad of other free (or close to free) collaboration services out there, which include Fuze Meeting and DimDim. Given the market size for this kind of collaboration tool there is certainly room for multiple companies to do well (especially as ‘virtual offices’ become more common), but Team Apart still needs to do something take separate itself from the rest of the pack.

The Team Apart founders were members of Y Combinator‘s class of Summer ’08, Update: Actually, this is the same project that the team was working on during the Y Combinator program, when the company was known as MeetCast. 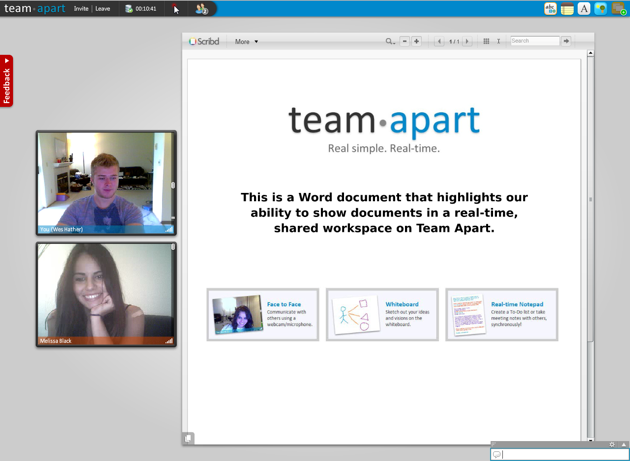