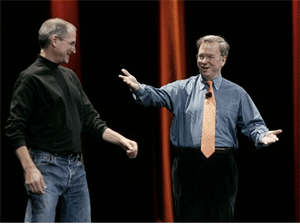 Lots of people will be arguing today that this was inevitable, but the news comes faster than expected. Google CEO Eric Schmidt is no longer going to sit on Apple’s Board of Directors, nearly 3 years after accepting a seat.

The resignation comes a few days after the FCC sent letters to Google, Apple and AT&T inquiring why Apple denied the Google Voice application from its iPhone App Store.

Here’s Apple’s statement on the matter:

Apple today announced that Dr. Eric Schmidt, chief executive officer of Google, is resigning from Apple’s Board of Directors, a position he has held since August 2006.

“Eric has been an excellent Board member for Apple, investing his valuable time, talent, passion and wisdom to help make Apple successful,” said Steve Jobs, Apple’s CEO. “Unfortunately, as Google enters more of Apple’s core businesses, with Android and now Chrome OS, Eric’s effectiveness as an Apple Board member will be significantly diminished, since he will have to recuse himself from even larger portions of our meetings due to potential conflicts of interest. Therefore, we have mutually decided that now is the right time for Eric to resign his position on Apple’s Board.”

Update: Google has provided us with the following statement from Schmidt:

I have very much enjoyed my time on the Apple Board. It’s a fantastic company. But as Apple explained today we’ve agreed it makes sense for me to step down now.

Hardly surprising, and it’s good to see both come clean on the situation: you can argue all you like, but Google’s foray into the mobile and computer operating systems, the two products mentioned in the statement (not to mention Chrome in the browser space), must have been quite the thorn in Apple’s and Jobs’ side. And I’m quite certain that the whole Google Voice App / FCC debacle only made the process a bit speedier.

Many people have always found it strange that Schmidt was on Apple’s board, but back in August 2006 when he took the seat Google had virtually nothing even remotely competing with Apple’s core products and services. It’s only in the last 20 months or so that possible conflicts of interests really became an issue, and we can’t forget that Schmidt was consequently asked to leave board meetings when critical things were shared about Cupertino’s plans for the iPhone and the App Store.