The Internet got in a bit of a tizzy this weekend when it was reported that Twitter was banned from being accessed from inside the White House. What is this, Iran, some wondered? But have no fear, despite what White House Press Secretary Robert Gibbs told C-SPAN, Twitter is apparently not entirely blocked and they’re working to open it up more, Deputy Press Secretary Bill Burton told Mediaite today.

Here’s where the confusion apparently comes from. Access to Twitter’s website is blocked on most White House computers, but that’s only for security and recordkeeping reasons for the time-being. Apparently, the White House is working with the White House counsel and the Office of Administration CIO “to review and relax these restrictions,” Burton says. And, more importantly, it is apparently not official policy of the White House that staffers are not allowed to tweet, and some do so from their own web-connected devices.

And there are computers that can post to Twitter in the White House right now via HootSuite, which you see from time to time as the source of official White House tweets. But most of the official White House account tweets are done by the new media team (consisting of Director of New Media Macon Phillips and Online Programs Director Jesse Lee), from the new media offices are in the Eisenhower Executive Office Building (which is next door to the White House). President Obama’s account is apparently handled by the DNC.

So there you go, while it is hard to tweet from inside the White House right now, it’s not impossible, and they’re trying to make it easier. It’s just a matter of recordkeeping and, quite literally, national security right now, which seems understandable.

And the White House wants you to know that it likes Twitter. It tweets about it not once, but twice today. First, to clear up the banning issue. And second, like a good Twitter user, to promote itself to try to get a million followers.

Lastly, it seems Burton has a good sense of humor about the whole thing. When asked to name some White House staffers that tweet, he replied:

I have an account that I follow on my personal blackberry but I don’t actually twitter myself. It’s more to keep track of what Diddy and Perez Hilton are up to all day. 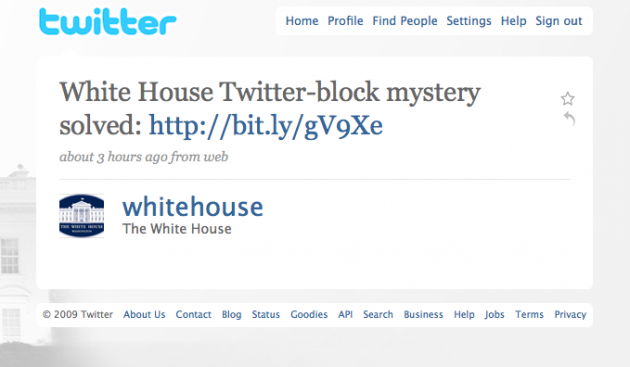 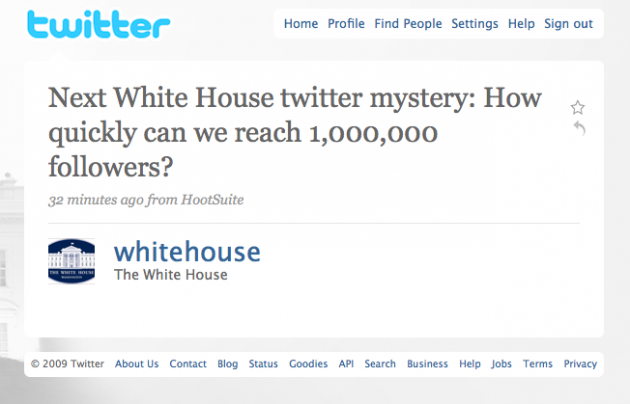